Discover a rare banknote and ... the smallest number known for the type!

In 1930, to commemorate the centenary of the country's first constitution dated July 18, 1830, the Bank of the Oriental Republic of Uruguay (1) "El Banco de la República Oriental del Uruguay" began manufacturing a series of 3 commemorative banknotes of 1, 5 and 10 pesos (2). The notes are all dated July 18, 1930 and include the following note on the back: "CENTENARIO DE 1830". Adela Herrera de Gutiérrez, a young Uruguayan woman, was the female figure chosen as the model to compose this series of notes which were the only ones to circulate in the country in 1930. These three notes represent one of the first examples of commemorative notes of the history of the world's banknotes. In the past, many countries have already minted coins to commemorate their important events, but the creation of commemorative notes is a relatively new phenomenon for the time.

For this special event and after multiple invitations to tender, the Banque of France is selected to produce the series. This order from Uruguay will allow the French institute to experiment with a new technique for making banknotes: intaglio printing.

The design of the 1 Peso Type 1930 banknote (Ref. Pick: # 17a) is a real team effort. The vignette design was entrusted to two experienced French artists: Sébastien Laurent (1887-1973) designed the front and Clément Serveau (1886-1972) designed the back. The engraving of the front is carried out by Georges Hourriez (1878-1953), the back is engraved by Eugène Gaspérini (Gaspé) and it is the engraver Jules Piel (1882-1978) who returns the heavy task of engraving the intaglio. 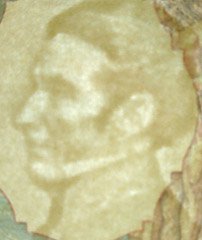 Description of the front: the note is printed in full color on white paper. Printer: Bank of France. On the right, the watermark with the portrait of José Gervasio Artigas "El Libertador". In the upper part we find the monetary institute "El Banco de la República Oriental del Uruguay" printed in blue in capital letters in a pale yellow frame. The banknote number is printed in black and repeated at two opposite angles. The bill does not include a series. In the center, the portrait of a young helmeted woman holding a shield. On the left, all labels are printed in blue: "Pagará al Portador la vista la candidad de (the bank will pay the bearer and on sight the sum of)" UN PESO "En Moneda de Oro o Plata Sellada (in currency payable in gold or silver) ”. "Ley de 4 de Agosto de 1896 (Law of August 4, 1896)" (3). The note is dated July 18, 1930 in Montévidéo. Three signatures (4) are affixed with The Manager (El Gerente), The President (El Presidente) and The Government Delegate (El Delegado Del Gobierno). The banknote we have chosen to illustrate this article and in the photo below is the smallest copy known to date and also one of the two most beautiful!

Description of the Back: in the center, in the upper part, the Coat of Arms of Uruguay framed by the words: "CENTENARIO DE 1830". On the sides, two Indians from the pre-Columbian era frame the medallion of the watermark and a view of the sea with a caravel symbolizing the arrival of the Spanish colonists and in the distance the Coats of Uruguay. At the bottom in the frame, the signatures of C. Serveau FEC. (Fecit) and E. Gaspé SC. (Sculpt).

13 notes are currently referenced in the PMG Population Report and distributed according to the following qualities:

We are currently counting 32 copies for this rare note, the numbers and qualities of which are presented in the table below:

(1) In 1965, a deep banking crisis led to the disappearance of the Bank of the Oriental Republic of Uruguay and its transformation into a new entity, the Central Bank of Uruguay, created from the Constitution of Uruguay in 1967.
(2) Summary table of issues for the series.

(3) By the law of August 4, 1896, the Bank of the Oriental Republic of Uruguay was created and obtained the monopoly of the monetary issue. The latter can issue up to 20 million in banknotes of 10 pesos and more, and up to 5 million in banknotes of less than 10 Pesos payable in “legal equivalent currency in gold or silver coin”.
(4) The President Alejandro Gallinal, the government delegate Juan Zorrilla de San Martín and the Manager Octavio Morató.