A very rare copy for sale at Stack's Bowers! 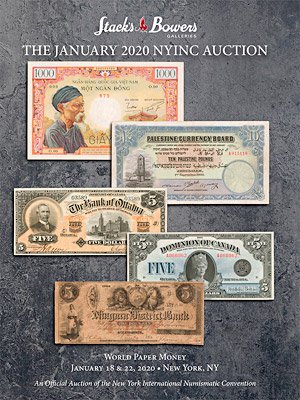 We have selected in this sale, a very rare banknote of 1 Pound BMA (British Military Authority) Type 1944 overprinted "BULGARIA".

As we indicate in another news concerning this note (The "Treasures" of the Live auction cgb.fr), the origin of the 1 Pound BMA (British Military Authority) Type 1944 banknote remains quite mysterious. We believe that the British Military Authority decided in 1944 to print a series of 100 One Pound banknotes overprinted in black letters for Bulgaria, Greece and France, probably in order to deceive the German enemy on the imminent Allied landing in southern Europe. The distribution of this hundred banknotes for the three countries remains to be confirmed but according to the bills already listed, we obtain the following classification: Bulgaria with 25 copies (39Z 000001 to 39Z 000025), Greece with 25 copies (39Z 000026 to 39Z 000050) and France with 50 copies (39Z 000051 to 39Z 000100).

> The Numizon inventory: we currently only know 4 other copies!

> The Numizon notice: an essential note not to be missed under any pretext for any collector specializing in war and Bulgarian banknotes! The fairly low starting price of $ 4,200 is a real opportunity to acquire this bill at a very attractive price ...