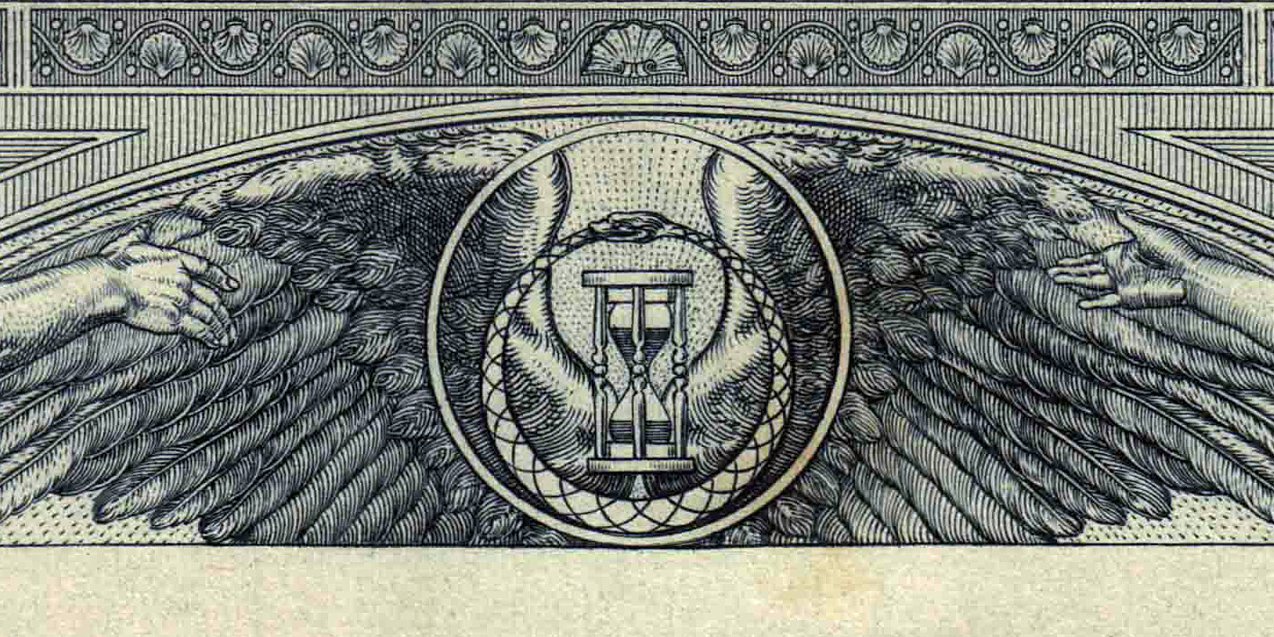 Discover the two known types of this Dutch banknote!

An allegory of the modern world!

At the beginning of the 20th century, the Bank of the Netherlands (De Nederlandsche Bank) launched a new issue called "New style" which begins with this 10 gulden note type 1904. The front is designed by the Dutch artist Nicolaas van der Waay (1855-1936). We discover an allegory of Work and Prosperity. The Work is represented under the features of a mature, muscular and bearded blacksmith, who reaches out to Prosperity, represented by a young woman dressed in an antique dress, sandals and tunic. At its feet, a cornucopia pours its benefits. The woman also reaches for the worker. The two characters are separated by an Ouroboros (1) surrounding a winged hourglass, the two elements symbolizing the passage of time and the eternal cycle of life. A white rectangle in the center of the note contains the texts in Dutch with the series, the wording of the issuing institute, the value in words, the place and date of issue and the signatures. The banknote number and signatures are printed in black. The note is printed on beige paper in dark blue monochrome on the front and in brown and green on the back. On this one, we can perfectly distinguish the three rows with in repetition the crowned lion holding a sword and a bundle of seven arrows.

References: Pick # 34 or Mevius # 36. Banknote dimensions: 170 x 96 mm. 4 different signatures in black. The location "Amsterdam" and the date are printed in blue on the front. The note circulates for almost seven years from 1904 to 1921 (2). Two copies are known as VX series, unsigned, unnumbered and perforated "INGETROKKEN 7 2 24 (WITHDRAWAL from 7/2/24)" horizontally (collection of De Nederlandsche Bank, DNB).

The banknote is fairly easy to find. We have listed around forty copies in the professional sales archives (Heritage Europe, Sincona, Spink, Veilinghuis de Ruiter and this copy sold at Stack's Bowers en janvier 2020).

Table of the 9 known variants:

This note is much rarer than the Type of 1904! No copies found in the sales archives of professionals but ... 17 copies are visible in the collection of De Nederlandsche Bank, DNB!

But in preparing this article, we found 6 banknotes for sale on the web:

Table of the 2 known variants:

See all listings from 10 gulden type 1904 Labor and Prosperity I...