The difficult relations of the ABNC with the Bank of France!

On July 17, a 1910-1920 advertising Card by the American printer American Bank Note Company (ABNC) was sold on ebay for the unprecedented price of $ 219.50. The document is a four-page leaflet written in French and intended for the European offices of the ABNC. On the front page (right), the ABNC logo is illustrated by three stars above a bald eagle head, the national symbol of the United States. Below, a text written in French and extolling the expertise of the printer. On the fourth page (left), a vignette in the format of a worthless note with the portrait of Paul Revere surrounded by allegorical figures. We recognize on the left the Mercury god carrying his winged petasus and holding in his hand his caduceus and on the right, Vulcan the god of fire.

Regarding the inner pages, on the left page, thumbnails of George Washington, Dom Pedro (Emperor of Brazil from 1831 to 1889) and another man, probably famous but unidentified. On the right page, an allegorical "Fortune" illustrated by a woman standing on a winged wheel. She holds a cornucopia in her left hand and with her right hand she seems to offer a bunch of grapes. On his left, the cathedral of Paris and on his right a French countryside!

It turns out that this last vignette served as an illustration for the front of a 100 francs Type 1918 "La Fortune" banknote. At the beginning of the year 1918, the American Bank Note Company tries to approach the directors of the Bank of France. An agreement is timidly concluded for the study of a 100 francs note on which should appear the usual characteristics used on the French banknotes (signatures of E. Picard and J. Laferrière, Article 139 of the Penal Code). In spring 1918, a first project is addressed to the Bank of France, but this model does not convince. Notable changes are requested on the dimensions of the note and especially on the visuals. On the front of the basic project, the main motive of "La Fortune" is framed by two locomotives that will have to be replaced by the cathedral of Paris and a French countryside! 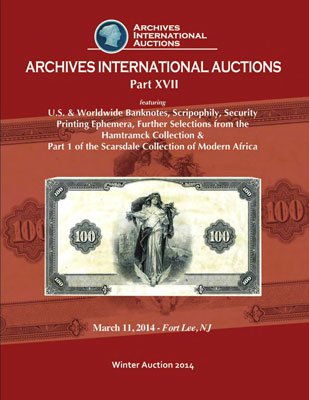 A sale of Archives International Auctions in March 2014, perfectly illustrates the difficulties faced by the ABNC in its relations with the Banque of France. Two of the lots proposed are particularly relevant to this 100 francs project. The first lot is a non-definitive front face proof sold for $ 1239 (excluding fees). this proof also illustrates the cover of the sales catalog (lot # 121)! The second lot is a set of five vignettes of "La Fortune" showing the different conception stages (lot # 122 remained unsold). In the description of the lot, it is stated that the vignette of "La Fortune" will finally be used on the 5,000 Korun type 1920 (Ref. Pick # 19) banknote for Czechoslovakia! As far as France is concerned, the project will never be approved and remained at the testing stage.

To finish, a review of some notable sales concerning this banknote of 100 francs type 1918!