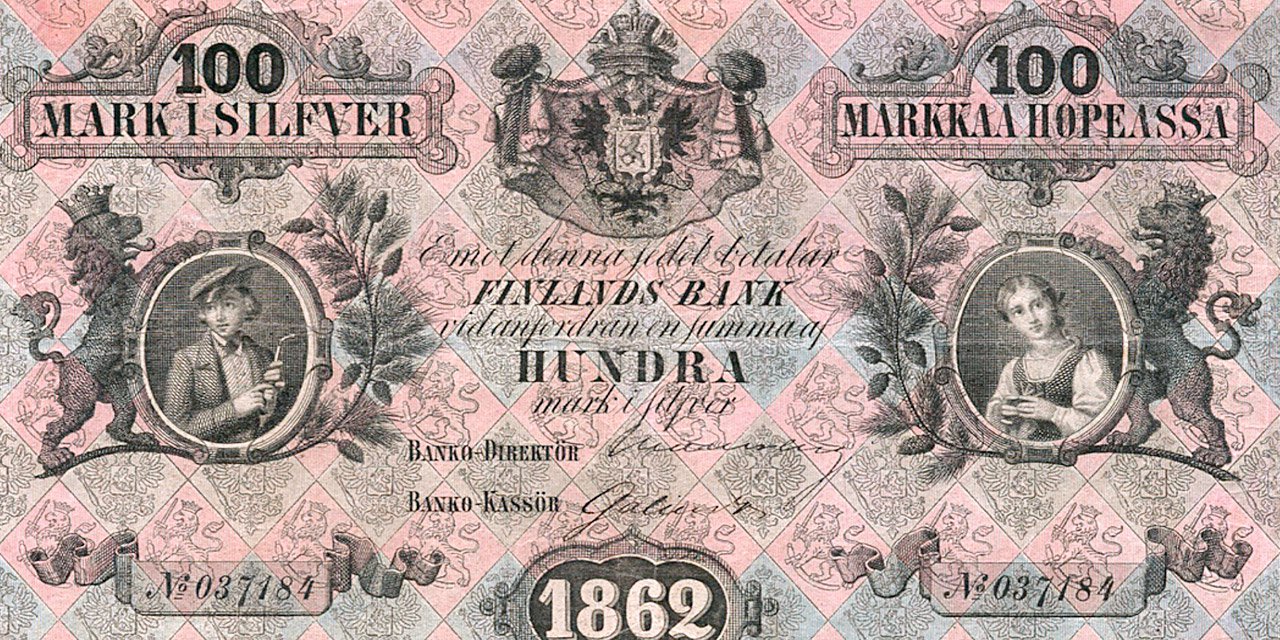 Discover a very rare banknote from the Bank of Finland!

In the middle of the 19th century, Finland was a Russian Grand Duchy and the national currency was defined in ruble. In 1860, under the influence of Finnish senator Fabian Langenskiöld (1810-1863), nicknamed since the "father of the markka", the Bank of Finland introduced the markka as a replacement for the Russian ruble at a rate of four markka to one ruble. The Finnish currency is then linked to the value of silver. The first series of Finnish banknotes was issued between 1860 and 1862 and had 6 denominations of 1, 3, 12, 20, 40 and 100 markka.

The 100 markka was issued in 1862. Designed by Aleksander Fadejev, the banknote still features the Russian coat of arms with the double-headed eagle at the top center. The texts in black on the obverse are mainly in Swedish and Finnish "100 Mark i Silfver / 100 Markka Hopeassa". On the sides, two medallions containing the portraits of a young woman and a young man are supported by a standing crowned lion and a wreath of flowers. The year "1862" is indicated in very large numbers at the bottom of the note with the numbering on the left and on the right in a transparent band. In the background, a predominantly pale pink and blue security background consists of continuous diamonds containing the coats of arms of Russia and Finland, consisting of a crowned lion, standing, brandishing a sword in its right paw and walking on a saber. The note is signed by the Director (Banko-Direktör) and the Cashier (Banko-Kassör) of the Bank of Finland. On the reverse, the texts in black are written in Finnish and Russian on a pink background. In the center, a view of an harbour scene in a crowned oval medallion and the value "100" in a rosette on the left and right. No watermark. Banknote dimensions: 152 x 89 mm. Printer: PSPH (Prussian State Printing House), Berlin. The 100 markka circulated from 1862 to 1880. on July 1, 1945, the denomination was definitively deprived of legal tender and withdrawn from circulation.

The three variants of the 100 markka

The banknotes of Finland are not yet referenced in the Numizon catalog, we indicate the dollar quotes taken from the WPM catalog (World Paper Money, 1368-1960).

The 100 markka Type 1862 is very rare. We only count 9 copies in inventory presented in detail in the table below. Copies with the letter B or the letter C are very rare!

The 100 markka Type 1862 without series note numbered "124094" and which illustrates our article, is offered at a starting price of $ 3600 in the next Live Auction of the American auction house Stack's Bowers (lot #30146). In the past and to our knowledge, this note has only been auctioned twice! The first time in 2015 at Spink with the numbered copy "037184" and a second time in 2016 at Christoph Gärtner with the numbered copy "379358". This next sale is therefore a must-attend event for all rare banknotes collectors!

Only 3 banknotes (including the one for sale) are referenced in the PMG Population report: