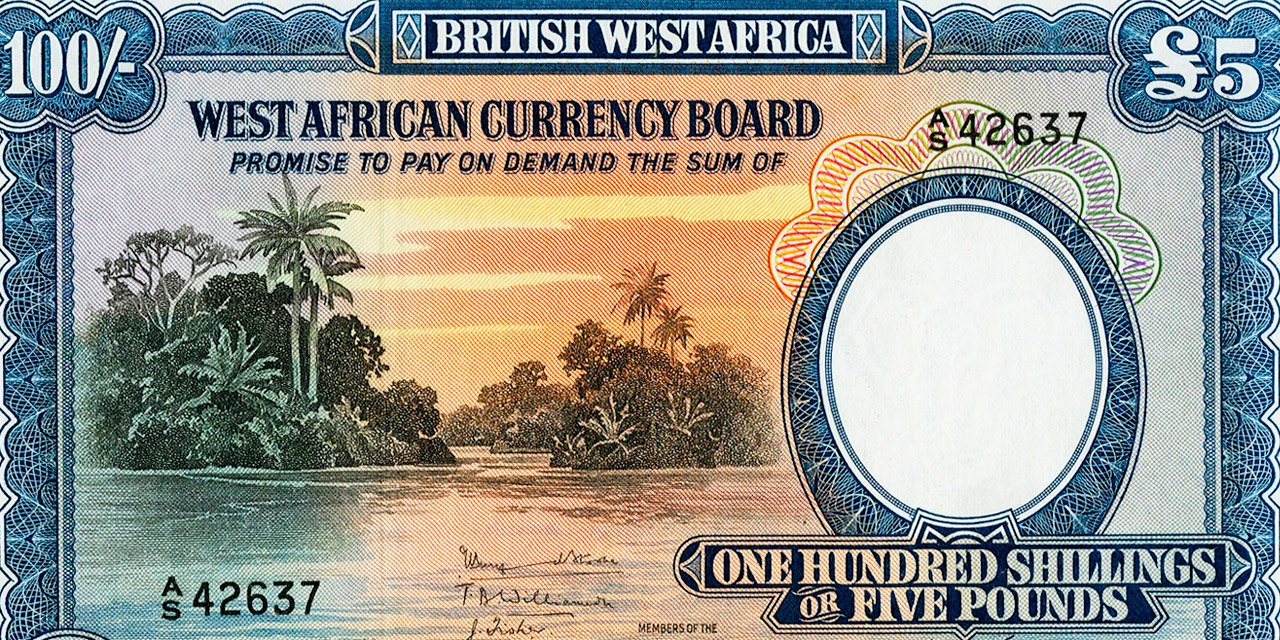 During the first half of the 19th century, Africa became the lust of several European countries, including France, England, Germany and Belgium. The frenetic competition that all these countries engage in and the tensions which result from it, accelerate the division and the colonization of the black continent. In this struggle and in comparison to France, the British, who seek above all to protect the road to India, are looking for smaller territories located mainly along the African coasts. The English crown begins by consolidating the regions where it is already present such as The Gambia, to which are gradually added the colonies of Nigeria, Ghana and Sierra Leone, thus forming British West Africa.

In order to federate this empire and provide for the development of the local economy based on free trade, the “West African Currency Board” was founded in London in December 1912. This organization is responsible for manufacturing sterling notes on the principle of those of the Bank of England ... The pound intended for British West Africa (British West African pound) is divided into 20 shillings and 240 pence and is at equal par with the British currency.

From 1916, to alleviate the monetary shortage, the West African Currency Board (WACB) authorized a first issue in notes of 2, 10 and 20 shillings. The denominations are produced by the English printer Waterlow & Sons Limited of London. A 5 shillings type 1920 banknote is provided as a supplement, but it will not be used. In 1918, a 1 shilling type 1918 banknote, the production of which was authorized by the Bank of England, was put into circulation. Between 1928 and 1951, only the 10 and 20 shillings notes will be issued again. In 1953, for the launch of the last issue, a new banknote of 100 shillings (£ 5) type 1953 accompanied the 10 and 20 shillings. This time, the banknotes present a new design, very characteristic of the style of the Waterlow & Sons printer, with an identical front composed of a view of the Niger River and its lush shores, but whose temporality is left to our choice: setting sun or dawn? The backs are distinguished by different scenes illustrating the theme of the harvest.

From 1957, the process of decolonization began and all the colonies of British West Africa began to gradually depart from this monetary union to create their own currencies. Ghana becomes independent in 1957 and the Bank of Ghana launches its first issue of banknotes in 1958. In the wake, Nigeria founded its Central Bank in July 1959. The last country to free itself is The Gambia in 1965. In this context, the 20 shillings type 1953 will however be issued until ... 1962. The British West African pound disappears definitively in 1968.

When we worked on the introduction of British West African banknotes for the Numizon catalog (1), we noticed that the 100 shillings = 5 pounds type 1953 (2) presented some very interesting features to be aware of. collectors.

The note has two issue dates:

Taking into account our unsuccessful research (3) for the 1953 banknotes and the tiny number of graded copies at PMG, we are convinced that the year 1953 should be classified as very rare. However, we must not lose sight of the fact that a find is always possible ... And the 16 banknotes of the series "AS 42607" to "AS 42649" undoubtedly come from a find which does not yet say its name!

Indeed, it is clear that our score (see table below) reveals a singular regularity of numbers and qualities for this "AS" series. All the banknotes are graded but no copy is known in a quality inferior to PMG 63 or PCGS 58 ... We should however see banknotes in inferior qualities, because it is obvious to all that all the issues for West Africa British circulating in regions not very conducive to maximum conservation of paper money!

These combined indices therefore suggest a recent find (2015?), but of which the total number of copies unfortunately remains undetermined. It will therefore be necessary to carefully monitor future sales to validate our observations ...

(1) All banknotes are now available for viewing since August 27, 2021.
(2) Known catalog references: Pick: # 11, The Banknote Book: # B111.
(3) We have not found any sales prior to 2014. This year corresponds to the sale of the copy from the prestigious Ruth W. Hill collection. The banknote is also currently available on ebay for immediate purchase, but at a completely different price!