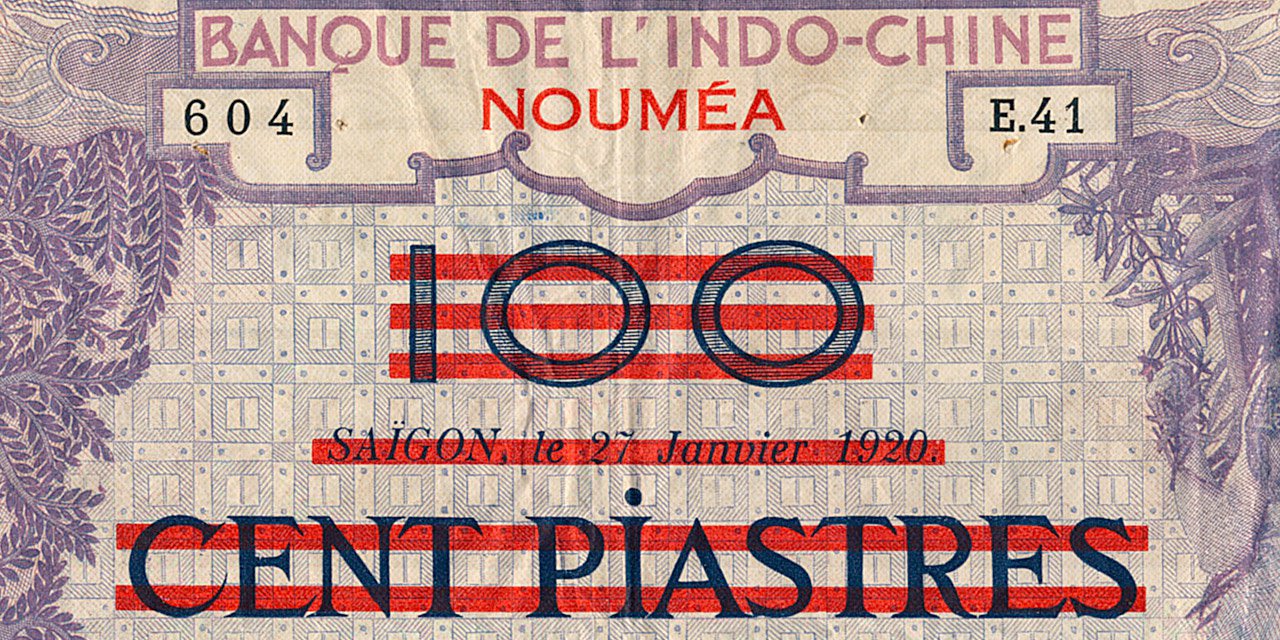 A note known only to a few rare copies!

In view of the upcoming arrival in the Numizon catalog of all the banknotes of New Caledonia, we present a preview of one of the most emblematic banknotes of this country with the 1000 francs on 100 piastres Type 1939 (1) .

When World War II broke out, France was quickly occupied and banknotes could no longer be sent to the colonies still ruled by the French state. The Bank of Indo-China then made the necessary arrangements to continue supplying the overseas territories with banknotes. Concerning New Caledonia, a provisional issue was decided and the 1000 francs thus saw the light of day in September 1939 ... 7000 copies of the 100 piastres note Type 1920 (2) are overprinted "1000 FRANCS - NOUMÉA - 1000" in red with three horizontal bars in red on the number “100”, a horizontal bar in red on the date “Saigon… 1920” and three horizontal bars in red on the value “HUNDRED PIASTRES”. The alphabets A.41 to W.41 are affected (3).

Descriptive card: creation by Henry Bellery-Desfontaines (DEL.) and engraving by Léon Henri Ruffe (SC.) for the front and Eugène Gaspérini (E. Gaspé) for the back. Dimensions: 212 x 142 mm. Watermark: native head in profile. Printer: Banque of France. Front and back printing predominantly purple. Description of the front: on the left, a Chinthe (4) standing on a column seems to dominate a peacock resting on a cloud in front of a stylized olive tree. Below this scene, the frame of the watermark. On the right, against a background of bamboo, a woman in a tunic and wearing a laurel wreath (allegory of France) holds an olive branch in her right hand. Her left arm resting on a column, she gently puts her hand on the shoulder of a young Asian in traditional costume. At the foot of the two figures, exotic fruits litter the ground. In the center of the banknote, on a background of repeating geometric patterns, the original wordings are crossed out in red. Below, the two signatures of the Administrator, Baron Hely d'Oissel and the Administrator-Director, Stanislas Simon (5). At the bottom of the front, the two words "MILLE FRANCS" and "NOUMÉA" are printed on a flaming yin / yang symbol. The alphabet and the number in black are repeated twice. Description of the back: the texts are in Chinese and in French. In the center, a dragon flies in stylized clouds against a background of stacked circular patterns. At the bottom of the note, article 139 of the penal code. The new overprints “MILLE FRANCS”, “1000”, “FRANCS” and “NOUMÉA” are printed in red.

According to MM. Maurice Kolsky and Maurice Musynski, on March 31, 1967, only 76 banknotes remained in circulation! For our part, we only have 10 copies of the banknote in inventory: 2 copies perforated “SPECIMEN” on issued note, 1 copy perforated “CANCELLED” and 7 issued notes, which we detail in the table below: