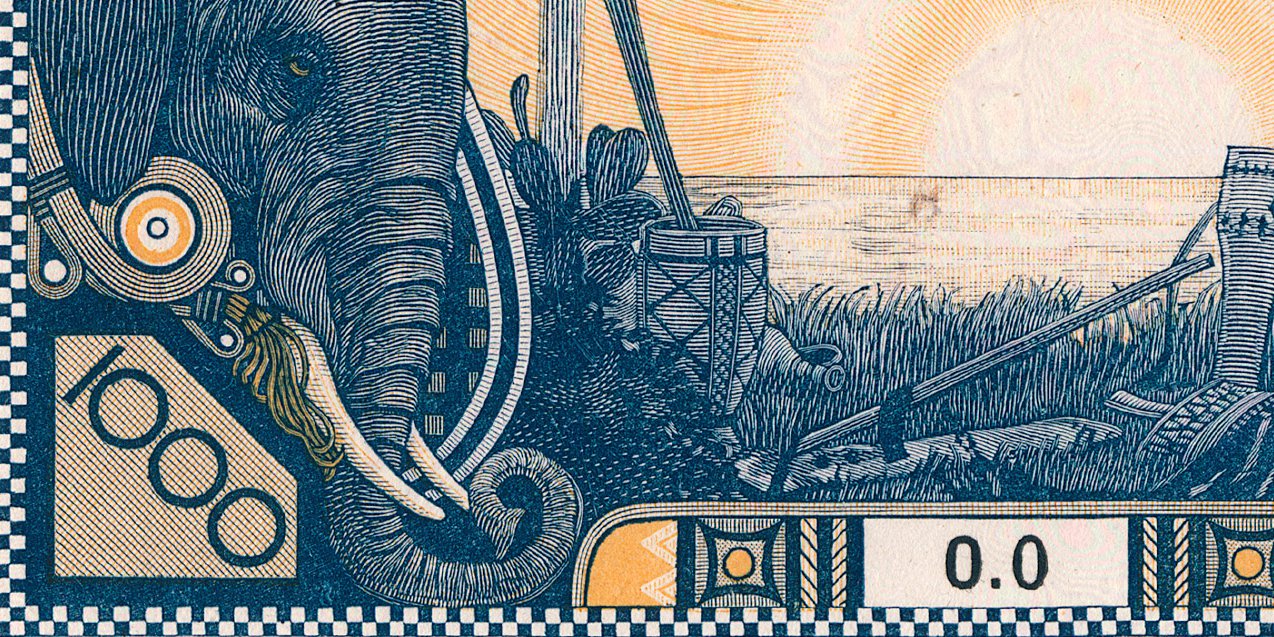 Discover an original proof of the front printed ... in blue and yellow!

A blue and yellow proof ...

In a few days, the catalog sheets for banknotes of French West Africa (FWA) will be available for consultation. In the meantime, here is a preview of an unpublished note from the 1000 francs Grand-Bassam Type 1901. (Ref. # LK151, # B106G or # P14D). It is a front proof with large margins (format: 252 x 158 mm) that we have cropped for layout reasons and to facilitate the observation of the graphic elements composing the thumbnail. This magnificent print has the peculiarity, undoubtedly unique to this day, of being printed in blue and yellow, unlike the other denominations of the Type which all have a front predominantly red and green!

And a second new proof for comparison!

As we do not yet have an archive a copy of the issued Type, we suggest you discover a second proof of the 1000-franc "Grand-Bassam" note, this time with the red-orange and pale green front, so that you can see color differences. This front and back proof with margins (format: 261 x 140 mm) is not watermarked and dated January 3, 1903. It also seems completely new because it is not mentioned in the reference works.

For information, we only know one single copy to date dated September 30, 1901 (Ref. Leclerc-Kolsky: # LK151b) and visible on the remarkable website of Eric Martin, Banknotes of FWA (in english too).

French administration. Bank of West Africa. Type of note with printed or overprinted issue location. Issues between 1902 and 1924. The front is the work of the artist Henri Bellery-Desfontaines (1867-1909) and the engraving was produced by MM. Ernest and Frédéric Florian. The back was designed and engraved by artist Georges Duval (1847-1919). Printer: Bank of France, Paris. Dimensions: 238 x 137 mm. Watermark: lion's head in a crescent (see infographic at the bottom of the article). The front is printed in orange-red and pale green. The reverse side is monochrome and changes according to the color assigned to the city of issue (see table below). On the front: the overall composition is of the “Art Nouveau” style of art. The background of the sticker is characterized by a sunset, the rays of which diffuse in pale green to the edge of the frame illustrated with geometric shapes and multiple decorations. The value "1000" is repeated in the corners. At the bottom of the bill in the foreground, two elephant heads face each other. In the background, local objects (including a drum, a mortar, a pestle and a jug) are placed at the foot of a palm tree on the left and an unidentified tree on the right. In the distance, a merchant ship moves away towards the future ...

In the center at the top edge in an octagonal medallion, a rooster and the word "GALLIA (France in Latin)" recalls that the BAO is under French administration. Below, the issuing institute "Bank of West Africa" ​​and the value in letters are printed in orange-red. Three signatures printed in black with An Administrator, The Director and The Cashier frame the place and date of issue printed in red-orange above the watermark. The series and the banknote number are printed in black in cartridges placed at the top and bottom of the note. On the back: a rich graphic composition frames three white cartridges in which the official labels are translated into Arabic and Wolof languages. The upper cartridge indicates the place of emission. The banknote strangely does not include the article 139 of the Penal Code!

The 1000 francs was the largest value issued for the Bank of West Africa for the period from 1902 to 1924 and its local value was 200 Dirhams (1 Dirham for 5 francs). The bill was issued for the 5 cities of Conakry (Guinea), Dakar (Senegal), Grand-Bassam (Ivory Coast), Porto-Novo (Benin) and Saint-Louis (Senegal). The back, which is common to all issues, is distinguished by a unique monochrome color assigned to each city: