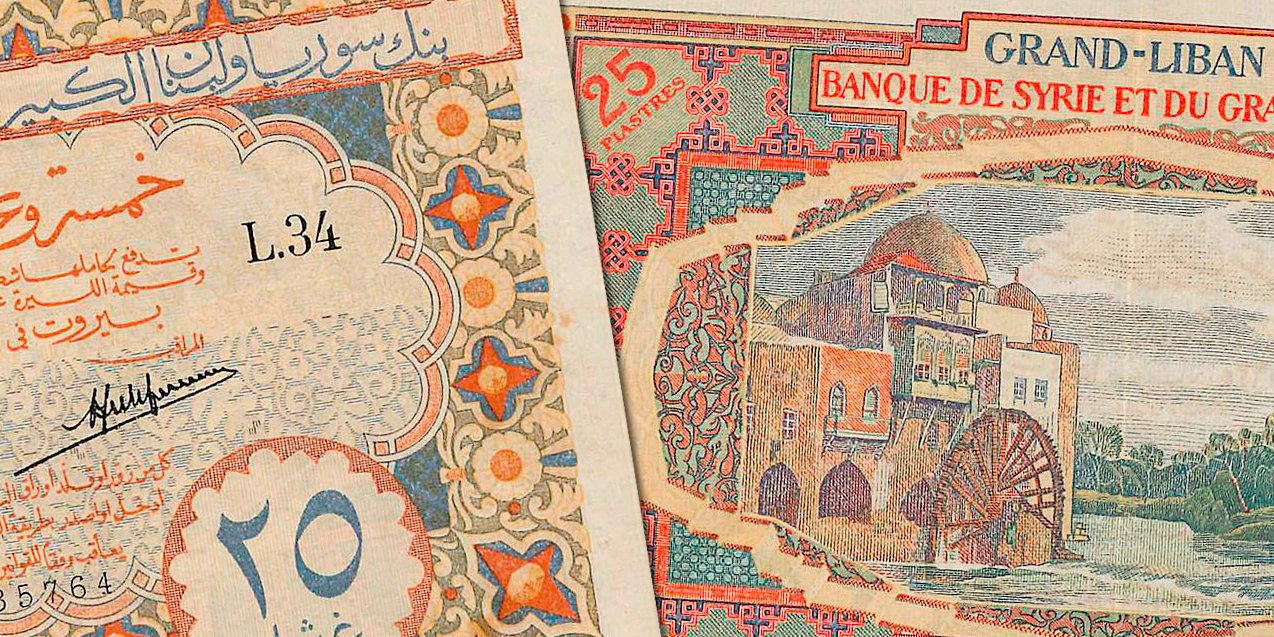 A very rare note from Lebanon and Syria!

At the end of the First World War, the Middle East region was devastated. The general infrastructure of Syria and Lebanon is completely destroyed. Everything is to be rebuilt and quickly ... These territories being placed under French mandate, the site is taken in hand by France which undertakes to modernize the administrations and to revive the economic activity. But it is undesirable to separate the two countries by customs barriers, which could slow the resumption of growth in the region. From 1920, the two countries were therefore recognized and managed as two independent states, each with local budgetary and administrative autonomy. In 1921, the French mandatory authority decided to create a "general budget for Syria and Lebanon" which would be directly managed by the High Commission. The objective is to pool certain services common to the two Levant states, such as customs, post, telecommunications, railways and ... the Bank of Syria and Lebanon! This regrouping will especially allow the French authorities to take control of financial revenues and to keep the pressure on the Syrian and Lebanese governments ...

The bank of Syria and Greater Lebanon

This banknote is the smallest value issued by the Bank of Syria and Greater Lebanon (BSGL) and the first of the 1925 issue. This is dated April 15, 1925 (the date is printed in Arabic on the front). The bill measures 130 x 85 mm and has the watermark of a wheat ear and stylized leaves in a rosette on the left on the front. 2,250,000 notes were issued and printed by the Banque of France.

Printed in predominantly blue-green, yellow and red colors, the banknote was designed by French artist Clément Serveau (1886-1972) and engraved by Paul Bornet. The front is printed entirely in Arabic with the numbering and signatures printed in black. The back is printed entirely in French. A composition of geometric figures with the value in red “25 PIASTRES” printed obliquely in the corners, frame a view of the water mill of Hama on the Oronte river. At the top, a yellow cartridge contains the overprint in blue "SYRIE" or "GRAND-LIBAN" and the red label "BANQUE DE SYRIE ET ​​DU GRAND-LIBAN". At the bottom of the back, a last yellow cartridge contains the value in letters and the words "Redeemable by bearer by check in Paris or Marseille at a rate of twenty francs per Pound". Only one type of signature is known with the Director General of Agencies, Félix Vernes and The Controller, Alexis Julien Laferrière (whose labels are printed in Arabic on the front).

A rare note for Lebanon and even rarer for Syria!

Our score includes to date a total of 61 banknotes* referenced including 48 with the “GRAND-LIBAN” overprint and only 13 known notes with the “SYRIE” overprint. Mr. Abdo Ayoub indicates the existence of only 18 copies for the Type! In addition, we point to an obvious find of 14 banknotes for the series "F.77" which Mr. Abdo Ayoub seems to indicate the origin of in 2012 (note: we hope it speaks well of the same find as us): “Aside from the finds made in Syria, an auction of 9 banknotes from 1925 - notes listed as very rare in my book - took place in 2012 in Israel. The explanation that was given to me is the following: it was a courier that left from Beirut in the 1930s to Tel Aviv. At that time, the State of Israel had not yet been created; mail then traveled normally between these two capitals, both at the forefront of progress in trade. This mail lost by its deceased recipient was found by his granddaughters 80 years later”.

We have also found that the number of series indicated in certain works is sometimes incorrect. For the 25 Piastres with the “GRAND-LIBAN” overprint, the series currently known ranges from M.3 to G.39 and A.57 to H.87. For the 25 Piastres with the “SYRIE” overprint, the series currently known range from O.43 to V.52 and B.97 to P.115. See details in the table below:

Reminder of the different references for the two 25 Piastres Type 1925 banknotes:

These documents seem very rare since we only found two sales:

2) "SYRIE": two proofs including an uniface front and an uniface back, sold at € 3,900 at cgb.fr, during the Live Auction Banknotes in May 2017 (lot # 4130136). Description: the proofs are printed on fiduciary paper with wide margins, without watermark, pasted on a cardboard page with windows. With date, without signatures or numbering. Handwritten signatures on the sidelines of the artist Clément Serveau in pencil!

The 25 Piastres in the PMG Population Report