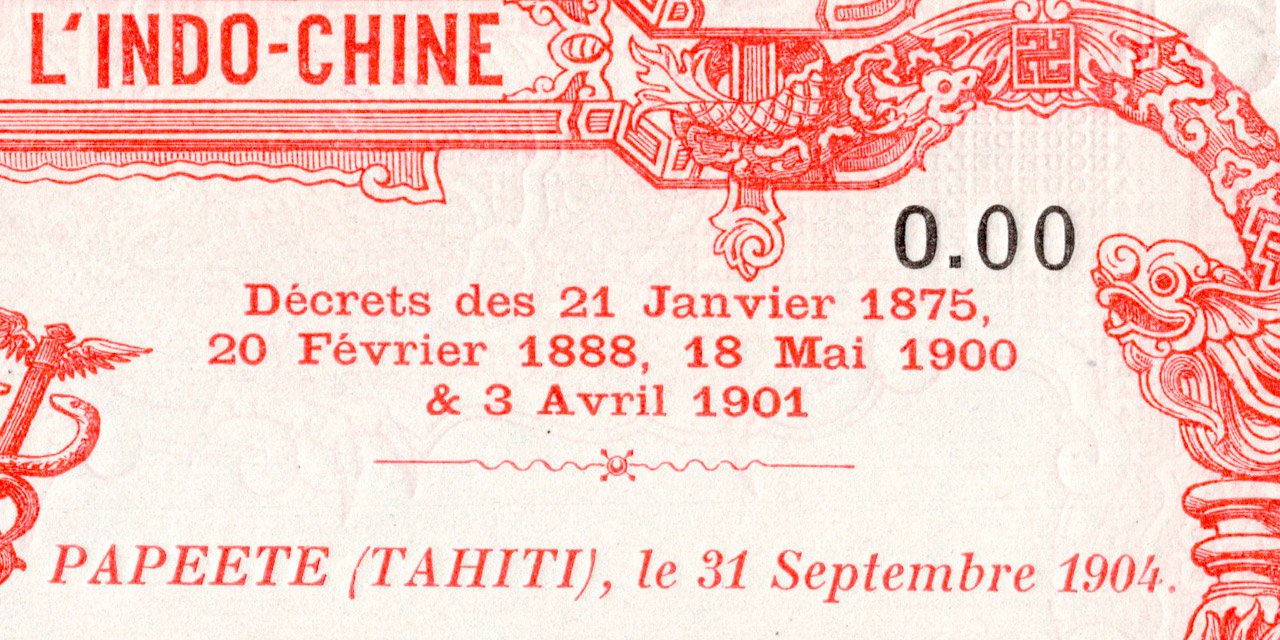 Discovery of an unpublished specimen with a date error!

Concerning the specimens, several types are already identified for this note, but during the preparation of this article, some nice surprises appeared. The first specimen is dated July 10, 1905, perforated "SPECIMEN" vertically or horizontally and numbered "O.0 / 000". As rare as the issued note, few copies are available on the collection market ... Unless we are mistaken, the only note offered by Heritage Auctions in 2018 and graded PMG 66 EPQ, sold at 1,440.00 $ (lot #28213). Also note that for France, cgb.fr has only offered two copies (lot # p04_0158 and lot # p04_0159) for sale in 2004!

We discovered that this specimen also exists without the "SPECIMEN" perforation, because this second variant is oddly not mentioned in the reference books. We did not find any trace of sale either ... only we are lucky to be able to show you a copy (3) as an illustration below:

A specimen with an error in a decree date!

Our second surprise concerns a known specimen from reference books. This specimen is dated September 31, 1904 (a fictitious date). The note does not have the “SPECIMEN” perforation and is numbered “O.00 / 000”. To date, we only knew of a single copy, estimated at € 4,000.00 in 2004 by cgb.fr and offered in the “Paper-Money # 4” auction (lot # p04_0157). The banknote was strangely unsold! The interest of this copy of approval of the final model is also due to the presence of an error on the date of the third decree with "May 18" instead of "May 16", error corrected and validated by the handwritten signature of the Director of the bank, Stanislas Simon! We found a second copy, but it is not corrected or initialed by a bank official and could therefore have served as an official specimen! It is of course a beautiful document and in perfect condition ...

In conclusion, these are therefore two new variants of specimens which are added to the types already identified. To summarize, we refer you to the description of the 5 francs type 1905 in quick access at the end of this article. Definitely, our collection is full of twists ...

Editor's note: The article you just read is the 300th in our "News" section, which is not so bad since our first news published in August 2019! We are therefore going to take advantage of this promising start to summer to take a little well-deserved rest. Happy holidays, great finds and see you in a few weeks on Numizon! Thank you for your loyalty.