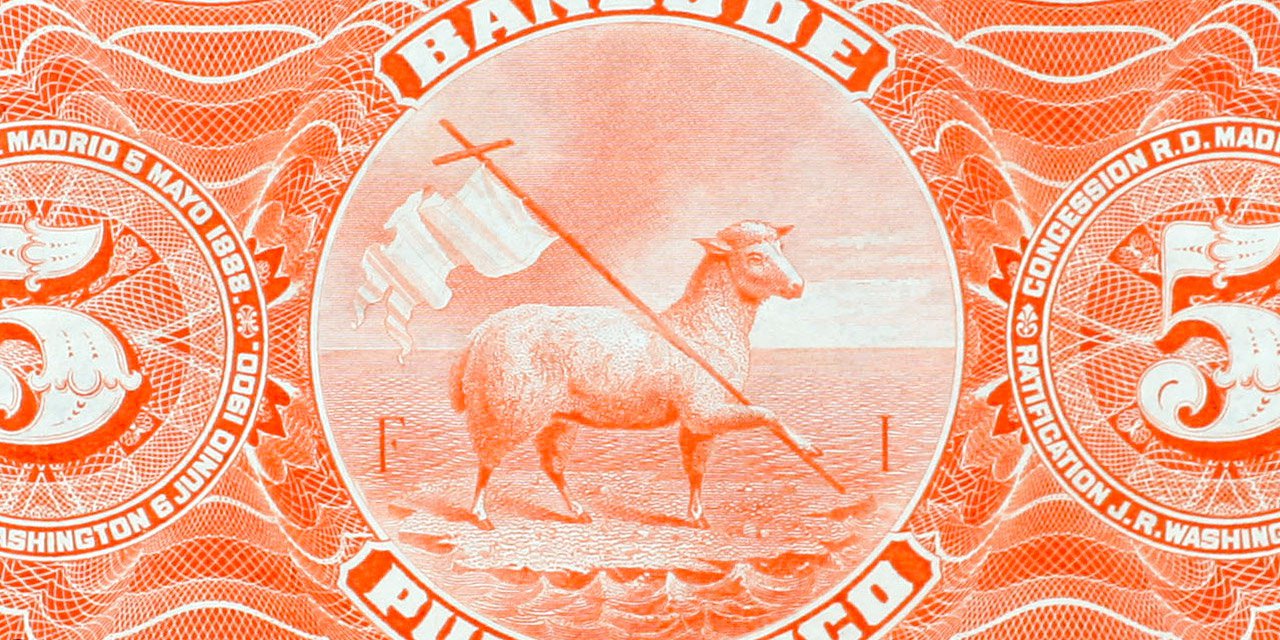 Discover this very rare note issued by the Bank of Puerto Rico!

Puerto Rico is a Caribbean island located east of the Dominican Republic and whose capital is San Juan. Former Spanish possession ceded to the United States in 1898 after the end of the Spanish-American War, Puerto Rico obtained in 1917 self-government and American citizenship for all its nationals. The island has its own constitution and elects its own governor. It is a free state of the Commonwealth associated with the United States but not incorporated into the latter.

Until 1898, the main currency in Puerto Rico was the Silver Peso. When American troops arrived in 1898, the American dollar was quickly introduced to the island. Then gradually, the American Administration developed a monetary system based on a double Peso-Dollar parity.

Between 1901 and 1904, the Bank of Puerto Rico (El Banco de Puerto Rico, formerly Bank Espanol de Puerto Rico) issued a series of 6 notes of 5, 10, 20, 50 100 and 500 Pesos / Dollars. The notes all have the serial letter "E" and are printed by the American Bank Note Company (ABNC). The bills are labeled and captioned in Spanish and English.

Porto Rico. Banco de Puerto Rico. 1901-1904 Issues. Catalog reference: Pick # 41. Date of issue: 1st July 1904 (1 Julio 1904). Material: paper. Watermark: no. Printer: American Bank Note Company (ABNC), New York. No security thread. Full color front and back printing, predominantly black, orange and yellow. Texts in Spanish and English. Description of the front: frame composed of small patterns and rosettes with the value "5" and "V" mixed in the upper corners and the letter "V" in the lower corners. In the center at the top, the issuing institute "EL BANCO DE PUERTO RICO" in a banner and its English translation below. In the middle of the note, a seated young woman (allegory of Commerce) is leaning on a large chest and holds a balance in her hand. A cornucopia pours gold coins at its feet. In the background, we can guess the coast of the island of Puerto Rico. On the sides, two black rosettes contain the value "5". The banknote number is printed twice in red. The signatures are printed in black. A single combination of signatures with El Presidente (President), El Interventor (Comptroller) and El Cajero (Cashier). The number of issued notes is unknown to us.

Reverse description: monochrome and orange-red print. Texts in Spanish and English. Composition of guilloche shapes and rosettes typical of banknotes printed by the ABNC. In the center, a circular medallion represents the Pascal lamb (1) carrying a banner on a sea bottom. It is one of the main elements of the coat of arms of Puerto Rico. On the left of the animal, the "F" represents Ferdinand II of Aragon. On the right, the "I" represents Isabelle I of Castile who has awarded the coat of arms to Puerto Rico! On the sides, two black rosettes contain the value "5" and the mentions recalling the concession of the island by the Spanish and its ratification by the American Senate in Washington (June 6, 1900).

Only 4 specimens are referenced in the PMG Population Report and distributed according to the following qualities:

The banknote issued is particularly rare! We only count 2 non-graded copies, grouped in the table below with three specimens and a proof whose sales we have found:

A specimen for sale on ebay!

All the listed specimens are known as overprinted "SPECIMEN" in red diagonal and perforated with three cancellation holes at the location of the signatures. Specimens are unsigned. A copy is currently on sale on ebay (2). The note has the distinction of having a larger upper margin in which it is indicated that the copy is dated "APR 1904". It would therefore be the 5th known specimen for the Type ...

(1) The Paschal lamb is a symbol of Easter in the Jewish and Christian religions. But it does not have the same meaning in these two religions. For the Jews, the Paschal Lamb refers to the night of the liberation of Egypt and the flight of the people of Israel. The Lamb, consumed by the Hebrews and his blood spilled on the lintel of the dwellings, saved the life of the first born in Israel. For the first Christians, the crucifixion of Jesus appears as the accomplishment of the offering of the Paschal Lamb, symbolically representing the innocent victim sacrificed to redeem the sins of men: "the lamb of God who takes away the sin of the world" .

Browse all the sales archives
and see all our listings pages.