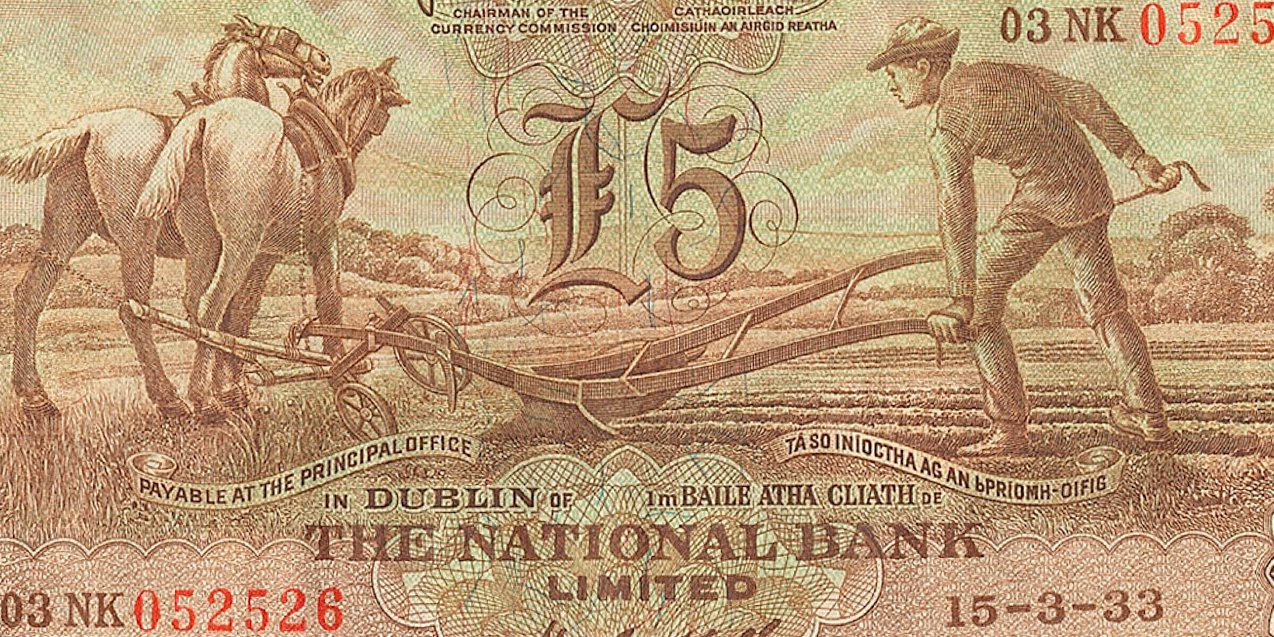 Discover an Irish banknote issued by the National Bank Limited of Dublin.

Presentation of the note

Although the constitution of an Irish Free State (Saorstát Éireann) was proclaimed on December 6, 1922, Ireland (Eire) did not really gain independence until December 1937. The Republic of Ireland then became a parliamentary system in which the two official languages ​​are English and Irish. This is why the composition of the front of this 5 Pounds note is divided into two parts: the texts on the left in English and their translation in Irish on the right. In the center, a large rosette and the numerical value serve as a dividing line. Below, a plowing scene is represented with a peasant and his two draft horses in the Irish countryside, hence the nickname attributed to the note of "£5 Ploughman". The design of the front is inspired by a drawing by Mr. Desmond Brien, one of the members of the first committee of the Monetary Commission. A harp and a clover make up the watermark. The bill was printed by Thomas de La Rue in London between May 6, 1929 and September 16, 1939 (but the last dates found stop for now on January 5, 1939). The dimensions of the note are 165 x 92 mm. Main printing colors: brown and green. The note is signed by Joseph Brennan, the President of the Currency Commission and by H. A. Russell. On the back, the Saint Patrick bridge over the River Lee and the city of Cork are represented inside a large guilloche frame made up of multiple rosettes with the value “£5” repeated on the sides. Known series range: 01 NK to 04 NK. The letter "N" in the series has been assigned to National Bank Limited (2).

Our score shows 29 known copies (2) and distributed in the table below:

We observed in our score the probability that a number of banknotes in good quality concerning the date of 15-3-33 are the subject of a recent discovery. The numbers assumed range from 03 NK 052523 to 03 NK 052596. But we have not yet been able to confirm this hypothesis!

1) Rating in £ indicated for 6 conservation states on the irishpapermoney.com website.

2) Rating in $ indicated for 3 conservation states by The Banknote Book.

17 notes are currently referenced in the PMG Population Report and distributed according to the following qualities:

(2) Concerning this Consolidated Banknote issue, created and regulated by the Monetary Commission between 1929 and 1941, eight Irish banks had to share the issue of this note. And in order to recognize the denominations issued by each of these banks, a specific serial letter was assigned to them:

See all Ploughman 5 Pounds referenced in the PMG Population Report!

(3) Note that our score only includes 9 “PMG” notes out of the 17 copies graded in the “PMG Population Report”. We must therefore add 8 PMG copies to the Numizon inventory, which gives 37 banknotes currently known for the Type!