A very rare note from the German occupation in East Africa.

On February 25, 2020, the sales company Dix Noonan Webb (DNW) will offer for sale a very rare copy of the 500 rupien type 1912 (Ref. Pick: # 5, Rosenberg: # 904 or Grabowski: # DOA-5), issued during the period of German occupation in East Africa between 1885 and 1918 (Lot # 574). The note has a marked central fold, slightly rounded corners and a few folds of angles. It is however classified in XF/AU grade and estimated between £ 6,000.00 and £ 8,000.00. This is the second time that DNW has offered this note for sale. This bill is so rare that only a few auction houses like Heritage Auctions, Stack's Bowers, Corne Akkermans or London Coins Ltd have also had the privilege of offering this banknote at auction ...

In 1885, Chancellor Otto von Bismark's Germany embarked on the creation of a protectorate in East Africa. The colony quickly spread over several countries including Burundi, Rwanda and part of Tanzania. In order to regulate monetary circulation and facilitate transactions in the occupation zone, the Deutsch-Ostafrikanische Bank (German Bank for East Africa) was created on January 6, 1905. It has all the powers to conduct banking activities, including the issuance of coins and notes denominated in German rupees. It fixes its head office and its jurisdiction in Berlin and installs a branch in Dar es Salaam in Tanzania (see photo below). 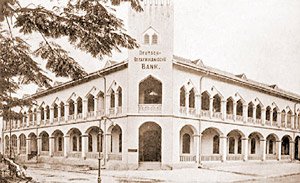 The bank opened its doors in November 1905 with the issue of a first banknote of 5 roupien type 1905. In 1906, the denominations of 10 and 50 roupien type 1905 were put into circulation. Then in the year 1907, it was the 100 roupien type 1905. In 1912, the increasingly growing demand for higher payment values, forced the bank to issue a last note of 500 roupien type 1912. The 5 notes are designed and printed by the Giesecke & Devrient printing house in Leipzig. All these banknotes will only circulate for a few years ... In 1918, after the German defeat during the First World War, the ex-colony was annexed, cut up and shared between Belgium and England ... thus giving birth in Belgian Congo and Tanganyika.

German Administration. Deutsch-Ostafrikanische Bank (DOAB). 1905-1912 Issue. The note was issued on September 2, 1912. Design and printing: Giesecke & Devriente in Leipzig. Dimensions: 180 x 110 mm. Watermark: star motif of the printer. Front and back: multicolored print, mainly brown and light blue. Front: the issuing institute "Die Deutsch-Ostafrikanische Bank (The German Bank for East Africa) pays the holder of this note at its Daressalaam cash desk without proof of identity. Fünf Hundert Rupien (Five hundred Rupies) at Daressalam, September 2, 1912. Deutsch-Ostafrikanische Bank ”. The banknote number is printed twice in red. The labels, the signature and the value in letters are printed in black on a blue and pink security background with the value "500" repeated continuously. On the left, in a frame decorated with patterns and rosettes, the portrait of the German emperor Wilhelm II (1859-1941) in admiral's uniform. Below, maritime symbols including an anchor, a buoy, a terrestrial globe, a rudder, a telescopic sight and a nautical compass.