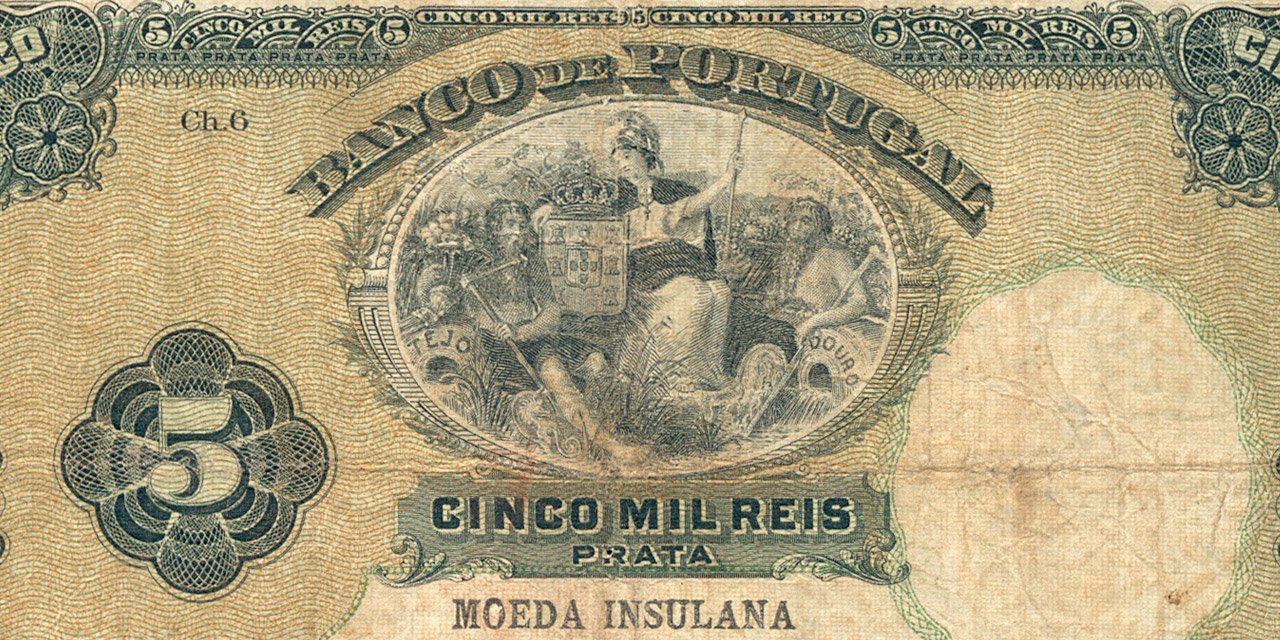 In 1895, a second series of banknotes was issued in denominations of 5,000, 10,000, 20,000 and 50,000 Reis, this time for all nine islands of the Azores archipelago. All these banknotes are made on the same plate as the banknotes issued for mainland Portugal, but with color differences and with the following specific mentions: “Pagavel nas Agencias dos Açôres (payable in the Azores agencies)” and “Moeda Insulana »(Island currency). These banknotes are therefore payable on demand to the bearer in prata (silver) or ouro (gold) on presentation in any branch of the nine islands of the Azores.

Between 1905 and 1910, a third issue was produced by the Printing Office of the Bank of Portugal (Estamperia do Banco de Portugal) in denominations of 2,500, 5,000, 10,000, 20,000 and 50,000 Reis. The five banknotes are designed with technical assistance from several European printers (1) in order to improve security against counterfeiting. Finally and unlike the previous issue, the notes are overprinted, or not, "Açôres" diagonally between two bars on the front. On the back, this overprint is repeated horizontally in the corners and in the center, but without the bars.

The 5000 Reis Prata Type 1905 (Ref. Pick: # 9 or The Banknote Book: # B108) is dated January 30, 1905 in Lisbon (Lisboa), but was not put into service until March 12, 1906. Its dimensions are : 141 x 91 mm. Multicolored front and back printing, predominantly yellow and green. Description of the front: frame decorated with rosettes with the value of the banknote in figures and letters in the corners. The texts are in Portuguese. In the center, a helmeted allegory of Portugal holds the country's coat of arms. On the sides, two men each carrying a cornucopia, are leaning on pipes from which the water flows symbolizing the two major rivers of the Iberian Peninsula: the Tagus and the Douro. Eight combinations of signatures are known for the Type with The Director (O Director) and the Governor (O Governador). The banknote is identical to the 5 Mil Reis Type 1903 (Ref. Pick: # 83), but has different colors as well as the words “Moeda Insulana” and “Pagavel nas Agencias dos Açôres” in the center above the date. The watermark, in an oval on the right, contains the face of an allegorical bearded man. The back has the same frame as the front and the coat of arms of Portugal in the center. Printer: Estamparía do Banco de Portugal. The note was withdrawn from circulation on March 31, 1932.

Only 10 banknotes are referenced in the PMG Population report with the distribution of graded banknotes in the following table:

Numizon inventory only records 11 known copies of the 500 Reis Prata Type 1905 (2) presented in detail in the table below:

A banknote is for sale on ebay!

(1) Bradbury Wilkinson, Giesecke & Devrient and Perkins Bacon.
(2) As we have only marked 5 of the 10 graded banknotes in the PMG population report, 5 graded copies are therefore likely to be added to our initial result ...
(3) Letters indicated in The Banknote Book: Azores.