Discover the banknote with six toes ...

Bank of Russia. New Ruble (1997-2004). The note does not have signatures. Printer: Goznak. Dimensions: 150 x 65 mm. Watermark: bell tower of the Pierre-et-Paul cathedral on the right and the number "50" on the left. Front and back: multicolored print, mainly dark brown, greyish purple and black. On the front: the note pays homage to the Neva (1), one of the four allegorical statues representing the four Russian rivers: the Neva, the Volga, the Volkhov and the Dnieper. These statues decorate the bases of two granite rostral columns dating from 1806. The origin of their name comes from the Latin "rostrum" (spur of a ship). 32m high, they are installed on the Place of Stock Exchange on the banks of the Streka in Saint Petersburg. Their walls are decorated with prows of ships (2) and at the top of these columns, torches served as guides for ships entering the port. In the background, a view of the Peter and Paul Orthodox Cathedral located in the fortress of the same name. The date of issue "2004" is indicated vertically in small characters to the right of the number "50" in gray (3).

On the back, The bill has a segmented security thread. The composition shows one of the rostral columns and the Stock Exchange building, which today has become a naval museum (see below).

The sculpture with six toes! 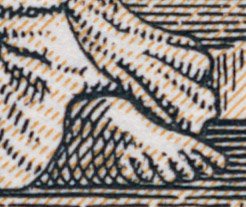 If you look closely at the foot of the sculpture on the front, you may notice that the toes of the Neva seem to be 6 in number! And yet the original statue has five, as it should be.
So, a design error or a voluntary message from the artist? This visual effect can already be explained by the fact that the shadow falls on the side of the foot. The artist represented this shadow by multiple crossed and repeated lines which undoubtedly give this graphic effect of a sixth toe. But in the end, everyone will see what they want ...