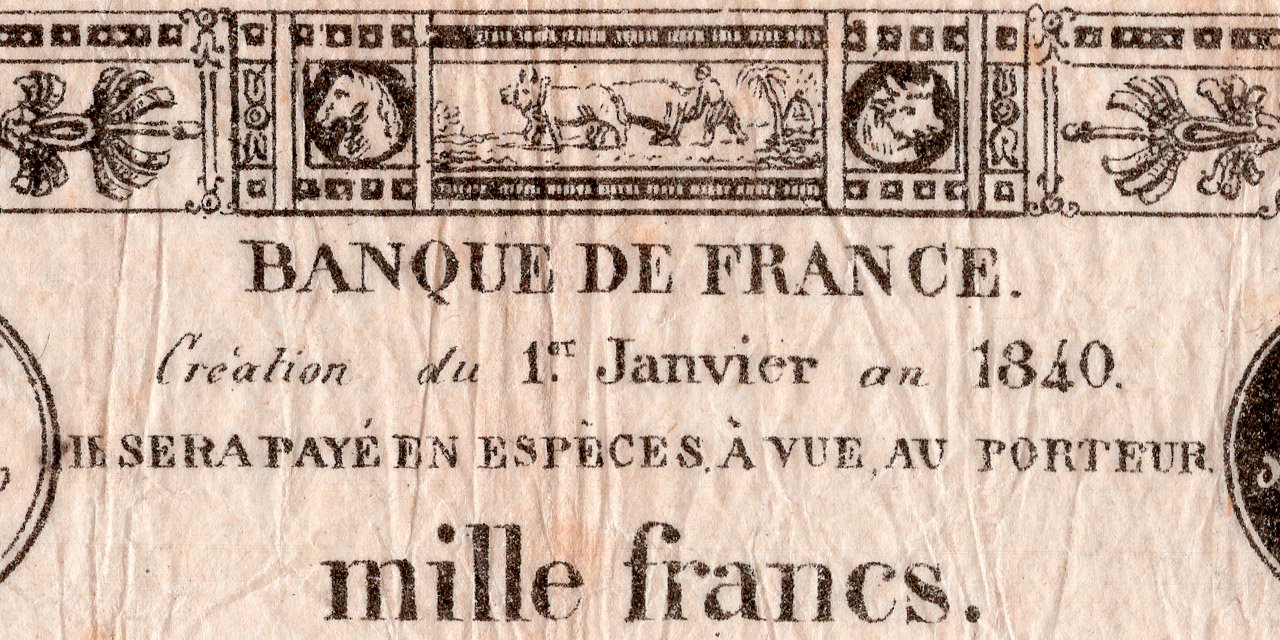 Discovery of the oldest advertising banknote!

Banknotes have long fueled the inspiration of advertisers for commercial purposes. Today we present to you a concrete example of successful imitation of a very rare 19th century banknote of 1,000 francs type 1831 (1) transformed for the occasion into a tiny amusement note intended to accompany the contents of a box of candies for New Years Day of ... 1840!

This unique document, printed in lithography on tissue paper, measures only 65 mm wide by 11 mm high! The technical prowess brought to the level of the engraving offers us a result of very great finesse of detail in the recopy of the original vignette. This small 1,000 francs is single-sided, although its back could easily lead to an identical reverse print like on the 1831 banknote ...

If we look more specifically at the graphic content of the advertising note, we first observe that the vertical writing on the left, includes the words "LEGER POMEL" in cursive letters and which could perfectly correspond to the signature of an engraver of the time specialized in intaglio named "Léger said Pomel" (2) or of the auction house and print publishing house "Léger-Pomel", established in Paris at 22, rue de the Vieille Monnaie between July 1835 and 1840. This fits perfectly with the period of issue of the 1,000 francs type 1831, put into circulation between September 15, 1831 and November 25, 1841.

The counterfeit banknote is numbered "V10 - 600", a numbering which is not at all in agreement with that of the real banknote (3), undoubtedly in order to avoid possible prosecution by the Bank of France. For the sake of detail, we also observe that the note includes a more or less successful imitation of the three signatures with The Principal Cashier, The Controller and The Secretary: De Crousaz-Crétet / Ville / Garat ... The signature of De Crousaz-Crétet being particularly difficult to decipher!

The author of the design has also allowed a few small innovations. In the central cartouche located at the bottom center of the front, the text "The law punishes the counterfeiter with death (La loi punit de mort le contrefacteur)" has been replaced by the word "CANDY (BONBON)"! The texts of the two circular cartridges containing "Article 139 of the Penal Code" and "Article 36 of the Law of 24 Germinal Year XI" have been replaced on the left by "Any Counterfeiter of this present Pay for his punishment (Tout Contrefacteur du présent Payera pour son châtiment)", and at right, by "A thousand assorted bags of well-chosen candies (Mille sacs assortis de bonbons bien choisis)"! Finally in the center, the text of the oval cartouche containing the “Control Register” has been replaced by “CASH OF THE DAY OF THE YEAR (CAISSE DU JOUR DE L'AN)”.

It now seems that this spectacular 1,000-franc “Candy” note is referenced as the oldest advertising banknote known to date (4).

(1) Known catalog reference: Fayette-Dessal: # F.A14.01.
(2) National Archives "F18 1806": dictionary of printers-lithographers of the 19th century: A Spaniard named Étienne Nunez de Taboada would have bought the secret of the chemical processes relating to “Lithography”, then having first misplaced and then found his patent again in 1828, he finally ended up selling it for 500 francs to an engraver named "Léger said Pomel"!
(3) The series of 1,000 francs type 1831 are: 23 to 37.
(4) The oldest advertising banknote found so far was the 1,000 francs “Fortier Process” dated 1845.