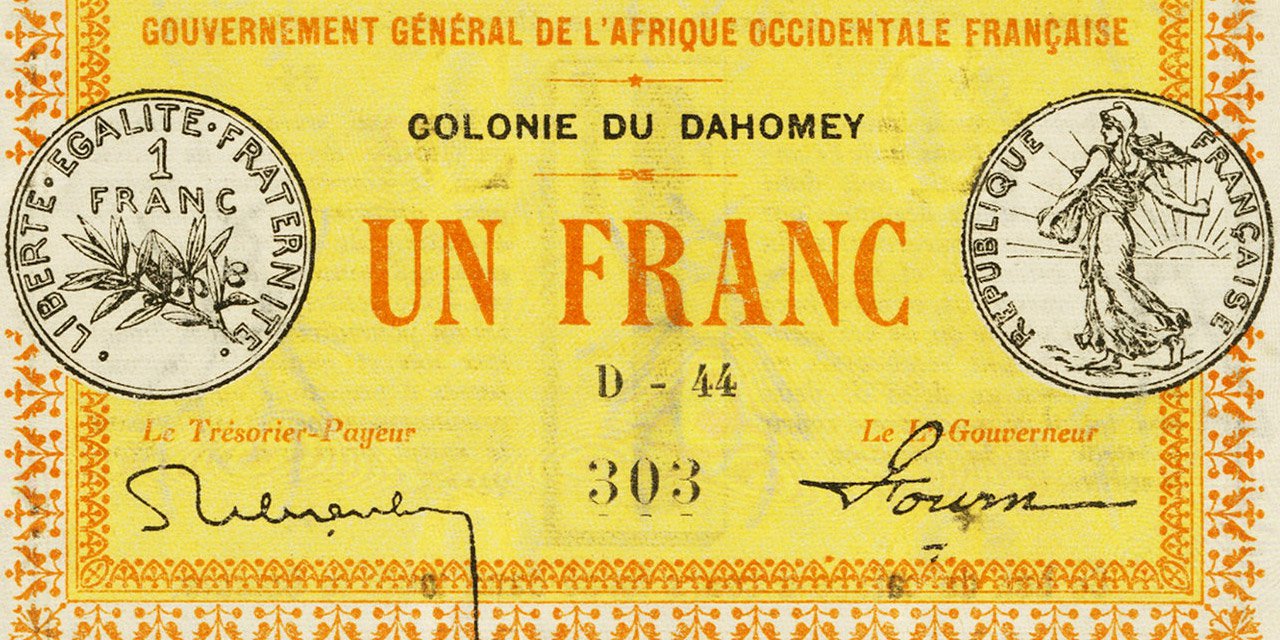 Discover the two banknotes issued in 1917

In 1895, France created a vast region, French West Africa (FWA) comprising a federation of eight territories including Ivory Coast, Dahomey (today Benin), French Guinea, French Sudan (today Mali), Mauritania, Niger, Senegal and Upper Volta (now Burkina Faso). Dahomey, a former African kingdom located in the south of present-day Benin, is incorporated into the FWA in 1894 following the conflict between France and Dahomey between 1892 and January 1894. The "colony of Dahomey" will subsequently become independent in 1960 as a republic of Dahomey, then, during the cold war, will be transformed into a communist state by taking the name of People's Republic of Benin in 1975, a country which collapsed during the fall of the Eastern Bloc to make way for the current Republic of Benin in 1990.

On the whole of the territory of French West Africa, it is the notes issued by the Bank of Senegal which are in use until 1901, date corresponding to the creation of the Bank of West Africa which then begins to issue. its own banknotes and to gradually replace the Banque du Senegal. When World War I ended, the African colonies were weakened by severe monetary shortages. On February 11, 1917, a special decree was adopted authorizing the issuance of emergency notes or cash vouchers of 50-centime, 1-franc and 2-franc (1).

All cash vouchers (50-centime and 1-franc) bear the signatures of the Treasurer and Cashier, Paul Riboulet and the Lieutenant-Governor, Gaston Fourn.

The rating of these banknotes

Notes
(1) The 2-franc note will never be put into circulation for Dahomey!
(2) The watermark with the “bees” and the “letters C” were also used on the Army Treasury notes issued during the same period (1917-1919) and in quite similar formats ...