When this note from Honduras was put on sale, I immediately noticed it, even if my first reaction was to say to me "140 € in B / B + condition, it seems expensive, but ... it's a type that I've never seen… ". So, armed with the sole conviction that old Honduran banknotes are very difficult to find, I quickly searched: large collections, search engine, archives, auction sites ... And here is what I now know about this extreme scarcity. This is a 10 Lempiras dated March 8, 1941, from the Bank of Honduras ("el Banco de Honduras"). This bank, of private statute, was the precursor of the current Central Bank of Honduras ("el Banco central de Honduras"), founded in 1950 and of state statute. Its first notes, issued from its foundation in 1889, were denominated in Pesos. However, in 1931, the Parliament ("Congreso Nacional") decided on a new national currency, the Lempira, on the basis of 2 Lempiras = US $ 1. 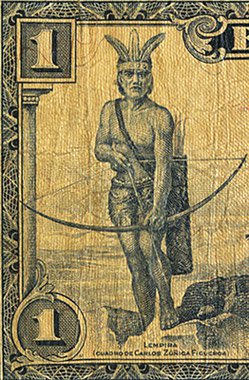 Lempira was the name of the chief (cacique) of the Lencas, who fought against the conquistadors between 1530 and 1537 and is now in Honduras, the symbol of the Amerindian struggle against the Spanish invader. The first series issued in Lempiras (series A) is dated February 11, 1932, with values ​​of 1, 2, 5 and 10 Lempiras (Pick: # 32 to # 37), all illustrated with the Lempira cacique ready to bend his bow, after a painting by Carlos Zúñiga Figueroa; we note that 10 Lempiras corresponds to the maximum value.

The second series (series B) is dated March 8, 1941 and includes 3 values: 5, 10 & 20 Lempiras (Pick: # 42 to # 44; Pick: # 38 to # 41 do not exist). 10 Lempiras has on the front right a portrait, in an oval frame, of Santos Soto Rosales, politician and former president of the Bank of Honduras, who died in 1932. The three signatories have not been identified. On the back, there is a cow's head with a look that you can see questioning or anxious, but this image is nonetheless recurrent, present not only on all the banknotes of this second series in Lempiras, but also on almost all the fronts of the emissions in Pesos, from 1889 to 1922.

Our bill has the number 001876. It is now only the third copy of Pick: # 43 to have an illustration available, since we only find on the internet that of n ° 006704, reproduced everywhere, the Pick presenting the photo of n ° 012573. This largest known issue suggests a very confidential issue, perhaps barely 15 to 20,000 copies. 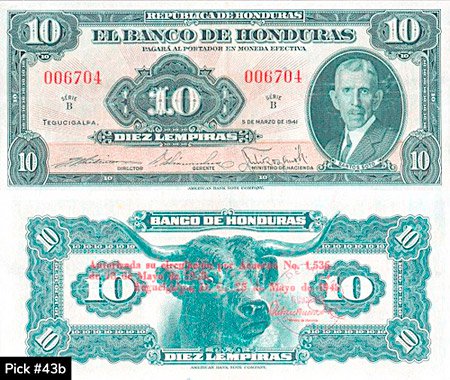 However, there are still two variants!

the specimen from 10 Lempiras 1941 (Pick: # 43as) is known to be overprinted "SPECIMEN" in red in the center oblique, numbered twice in red "00000" and comprising three cancellation perforations at the location of the signatures. A copy was offered in UNC grade at € 500 by Christoph Gärtner GmbH & Co. KG, Banknote Auction of April 2015 (lot # 31563).

Honduran banknotes are not yet registered in the Numizon catalog!