Discover the banknotes issued since 1990. 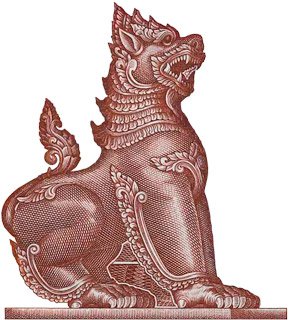 The Socialist Republic of the Union of Myanmar (officially called Burma) is a country in Southeast Asia having a common border with China to the northeast, Laos to the east, Thailand to the southeast south-east, Bangladesh to the west and India to the north-northwest. The capital is Rangoon. Myanmar is above all an agricultural country heavily dependent on its main product (rice) which accounts for two thirds of the cultivated area and 40% of the value of exports. Burma's history is long and complex. It takes place mainly within the current borders of the country ... If we stick to recent history, Burma was conquered and administered by Great Britain between 1824 and 1886, then gradually became a autonomous colony until its independence in 1948 with the official name "Burma or" Union of Burma ". Since 1989, its official name in Burmese is "myanma" spelled falsely "Myanmar" (1)!

Between 1962 and 1988, the country experienced a long military dictatorship with General Ne Win, first as a military leader, then as a self-proclaimed president. In September 1988, the army deposed Ne Win and created a new ruling junta. Despite the multiparty legislative elections of 1990 which allowed the main opposition party, the National League for Democracy (NLD) to win a landslide victory, the junta refused to cede power. NLD leader and Nobel Peace Prize winner Aung San Suu Kyi, with whom the junta has an ambiguous position, has been arrested and placed under house arrest on numerous occasions. In 2007, demonstrations led by pro-democratic activists and Buddhist monks were strongly repressed by the authorities. Cornered, the junta proposed in 2008 a referendum allowing the establishment of a democratic constitution through the organization of legislative elections. These are won by the National League for Democracy. At the end of the parliamentary process, Htin Kyaw becomes President of the Republic on March 15, 2016, but must quickly leave office for health reasons. Win Myint, the current President of the Republic of the Union of Myanmar since 2018, promised in his inaugural speech "to amend the constitution in order to build a federal democratic union"!

The first Burmese banknotes appeared from 1897 during the period administered by England with the issues of the "Government of India" until 1945, then then with the issues of the State of Burma from 1947 to 1987. Burma having been occupied between 1942 and 1944 by the Japanese army, two issues were also put into circulation at that time (2). For the moment, we have chosen to only publish the issues of the Central Bank of Myanmar from 1990 to 2020. The notes issued from 1897 to 1987 for Burma will be added to this catalog as soon as possible ...

The 24 banknotes that we are presenting are very easily accessible in good condition for any collector starting out in a new country and for a very affordable price. However, specimens will be much more expensive and more difficult to obtain!