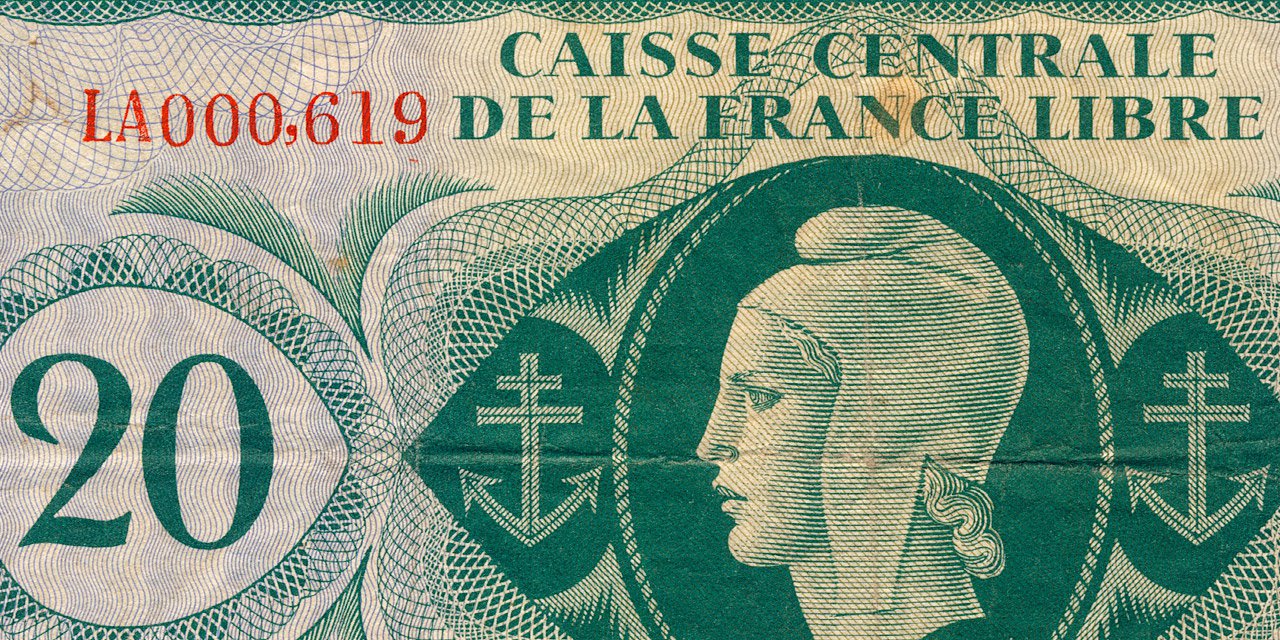 A rare banknote from free France

On December 2, 1941, the French National Committee, government of Free France, created by ordinance the Central Bank of Free France, a public institution with the exclusive right to issue bearer notes having legal tender and unlimited discharge power in territories placed under the authority or mandate of Free France. René Pleven becomes Chairman of the Supervisory Board, André Diethelm Director General and the head office is located in premises close to the Bank of England in London. The objective of the Central Bank of Free France is "to allow a complete reorganization of accounting methods and to constitute the treasury, at the same time as we set up an issuing body, a foreign exchange office and an investment counter. The parity of the pound sterling is fixed at 176 F free. General de Gaulle pledges to sell at least half of his territories' gold production to the Bank of England. Free France will cover the civilian expenses of its territories with its own colonial resources (1)”.

From July 1942, the Central Bank of Free France was responsible for "issuing bearer notes and metal currencies with final discharge in the designated territories". She released a first series of banknotes of 5, 10, 20, 100, 1000 francs and 5000 francs Type 1941, but the 5000 francs will remain at the draft stage. The series is drawn by Edmund Dulac and printed by Bradbury and Wilkinson of London. The banknotes are first issued in French Equatorial Africa, then in Saint Pierre and Miquelon and after their rallying, in Martinique, Guadeloupe, French Guyana and Reunion.

Less rare than the 1000 francs Type 1943 Saint Pierre and Miquelon, of which we will publish an article very soon, the 20 francs Type 1943 Saint Pierre and Miquelon (2) is identical to the 20 francs Type 1941 issued for the French Equatorial Africa. It does not have a watermark or issue date (probably put into circulation from January 20, 1943). Its dimensions are 135 x 75 mm. The banknote is printed predominantly dark green on a purple and yellow gradient security background made up of guilloche patterns and continuously repeated rosettes. On the front, the note is made out in the name of the “Caisse Centrale de la France Libre (Central Bank of Free France)” with the value “20” repeated on the left and on the right. The numbering is printed in red and repeated on the left and right at the top. Signatures, values ​​and labels are printed in dark green. In the center in a dark green oval, a portrait of Marianne (3) wearing a Phrygian cap in profile to the left. Two Lorraine cross marine anchors frame the figure (4). Two signatures: The Director General, André Diethelm and The Chairman of the Supervisory Board, René Pleven. Description of the back: guilloche shapes in the corners on a safety background in yellow and purple gradient and in the center in an oval rosette, article 139 of the Penal Code framed by the value "20" repeated on the left and on the right and the Ordinance of December 2, 1941.

All banknotes issued for French Equatorial Africa and other territories are strictly identical. The only way to tell them apart is their number range! Concerning the banknotes issued for Saint Pierre and Miquelon, the numbering goes from LA 000,001 to LA 030,000 or 30,000 copies! Note that the banknotes numbered LA 030,001 to LA 530,000, also intended to supplement the monetary supply of Saint Pierre and Miquelon, were lost at sea in March 1943.

Numizon's inventory currently includes 20 banknotes including 2 specimens. The smallest number LA 000,619 is in VF/XF grade and illustrates our article. The largest known number LA 029, 052 in VF grade, was sold for € 120 at Christoph Gärtner Auction in 2019. The note is totally unknown in grades above VF/XF! A copy in good quality would undoubtedly make an exceptional price at a sale ...

Discover now the inventory in detail in the table below:

According to Maurice Kolsky, 10 copies were taken from the series to serve as a Specimen! No copy has been found to date. A second type of specimen is known numbered LA 000,000 and perforated with two cancellation holes above the signatures (6). A third Type of specimen numbered LA 000,001 to LB 1,000,000 is known in private collection. This also corresponds to the specimen of the French Equatorial Africa type, see below:

The Numizon rating for this note

The quotes shown are estimates calculated from sales observed in recent years. However, this note remains very rare and sales records could contradict these figures!