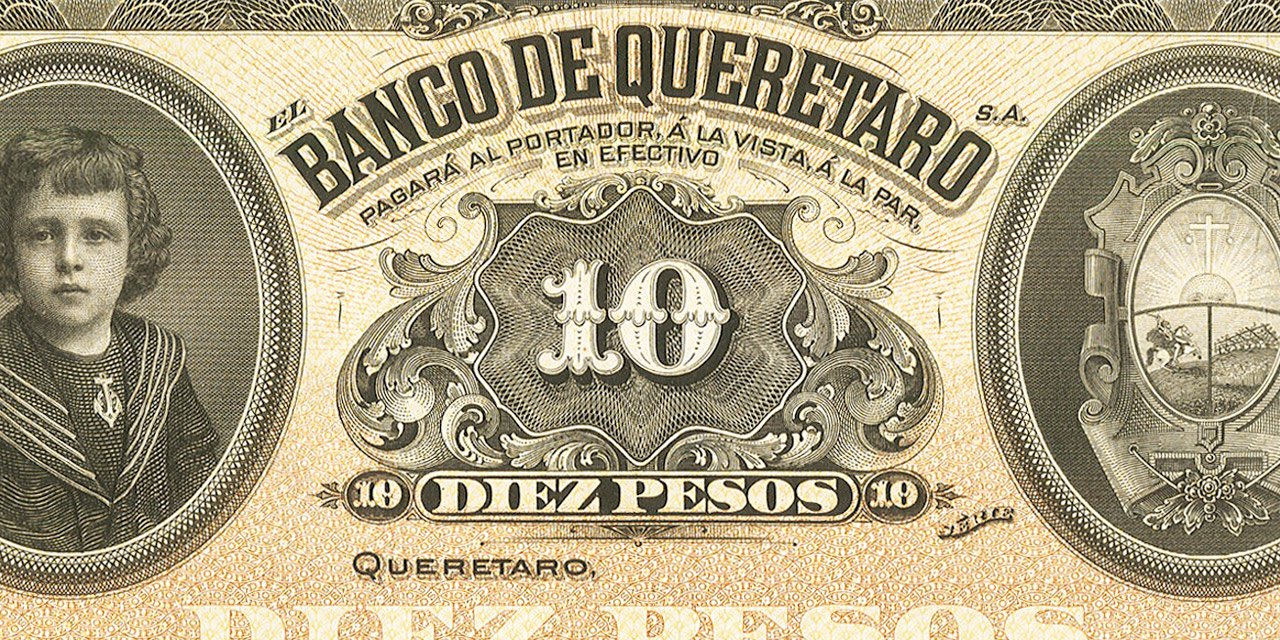 An approach to Mexican paper numismatics.

Collecting banknotes from Mexico is entering a specific and endless universe, a world as vast as that of the paper numismatics of its neighbor the USA, which is saying something.

If we leave aside the precursors, of which we can still find cancelled copies, we can retain 3 main periods, each teeming with types and varieties:

Let us return to the numismatics of the period of local commercial banks.

Overall and to have a clear idea, small and medium values ​​(up to 100 pesos) can be found; on the other hand, very strong facials (500 and 1000 pesos) are often extremely rare in issue and most often appear in the form of undated and unsigned specimens.

In addition, especially the small current circulation values, but sometimes also the strongest, have frequently been overprinted for branches: the interested collector will be able to daydream in front of the very long list of numbers of the specialized World Paper Money (WPMS) for "el Banco Nacional de Mexico ”(see in particular PS257 & S258). Let there be no mistake: despite the odds increased by 30 to 50% compared to the standard type, these are often great rarities and we can be happy to have a few.

The note presented here is a 10 pesos from "El banco de Querétaro", bank active from 1903 to 1915 and which operated in 3 states of central Mexico: Querétaro, Guanajuato and Michoacán. It issued a whole range of values: 1 and 2 pesos, only in 1914, and 5, 10, 20, 50, 100 and 500 pesos from 1903, the 1000 pesos only existing in proof and specimen. Printed by the American Bank Note Company (ABNC) in New York, like all values ​​from 5 to 1000 pesos (the 1 and 2 pesos having been printed locally), the 10 pesos presented on the front, on the left, the portrait of 'a little girl identified by the WPMS as Guadalupe Obregón (from the family of Álvaro Obregón, Mexican politician?), and on the right the coats of arms of the State of Querétaro. On the back, a steam train passes under an aqueduct. Built in the 18th century, this stone building emblematic of the region, measures over 28 m high and 1,300 m long ... and is famous even in chocolate bars!

Although currently in use, the 10 pesos are all in the A series, for a total number of around 100,000 copies, divided into 3 references in the WPMS. By deepening this classification, this gives:

We get a total of 59 copies (if we add the 16 banknotes without numbers from HA)!

Note: the overprint for the city of Irapuato, located in the neighboring state of Guanajuato, also concerned 5, 20, 50, 100 and 500 pesos of the same series. The reason for this overprint is not clear to us since the bank "Banco de Guanajuato" existed in Guanajuato, but that it too has overlprinted some of its denominations for Irapuato (Cf. PS289e or D290d). And there are also overpriced “el Banco Nacional de Mexico” banknotes IRAPUATO (S257t, 258x, 259q). We can only assume that the city, still thriving today, especially thanks to the richness of its soils, was an economic center of extreme importance.

In the end, our note was purchased for € 45, a price in accordance with its rating (G: $ 40 F: $ 125 XF: $ 375). The small number of copies noted for this note confirms, however, that it is not so common and, compared to contemporary banknotes from the Banque of France like the 20 francs "Blue", of which a hundred are currently on sale, we can say that the availability / odds ratio is very in favor of the Mexican banknote!