The rarest of the 20 francs "Moorish - large format" for Algeria

We presented here in December 2019, on the occasion of the sale of a copy of 1920 for Tunisia (1), the 20 francs "Moorish - large format", specifying that, if it is the type the most common for the Bank of Algeria / Tunisia, it conceals a number of very great rarities, especially for the first vintages.

The rarest eBay auction of its kind for Algeria gives us the opportunity to say a little more. In fact, it was a 20 francs dated April 3, 1922, in correct VG, which went up for auction this June 2020.

This vintage is the last for the first signature variant of this 20 francs: Biron / Moyse. It is therefore by far the rarest year for Algeria, with currently only 3 copies listed:

The margin of uncertainty is large, but this known news certifies the printing of at least 32 alphabets for 1922, or 800,000 notes.

The bids were more bitter than for the 20 francs 1920 from Tunisia, yet of at least equivalent rarity, since the final price reached almost three times, with € 188 excluding fees for the buyer. 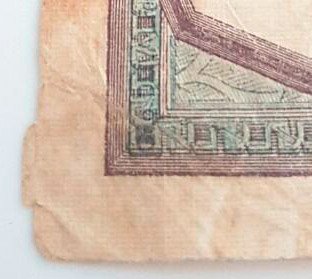 Is this the only rarity that has motivated this craze? In any case, the seller had highlighted a peculiarity, certainly unspectacular but actually quite unusual: the note has, in the lower part of the left edge when you look at the front, a slight appendix of paper. This defect is genuine (the margin has not been cut), and probably corresponds to a trimming defect. If this type of default is widely known for the Bank of France, - especially in its both the most common and the most demonstrative form, a paper appendix in a corner, a fault well identified from the issues of the Second World War - , it is exceptional before the 1940s. For comparison with our copy, we will look, on the Kajacques numismatic site, the 50F Merson from 1933 with a very similar defect.

Currently, this defect is, to my knowledge, only the 2nd or 3rd type of fault referenced for the Bank of Algeria. The other two published types are:

- the 100 francs of August 24, 1921 from the Kolsky collection, so altered that you can hardly imagine how it ended up in circulation, except to imagine that someone had recovered it in the trash ...

Like the trimming problem, it is the consequence of a hazard in the manufacturing process.

- the 500 francs Bacchus replacement with no surcharge, which I published in the Numismatic Bulletin n ° 134 of cgb.fr and which remains, 6 years later, still known to only 2 copies: it is however possible that it is not a fault in the strict sense, and could be explained by a deliberately discontinuous emission ...

In conclusion, this 20 francs from 1922, at the same time very rare, (slightly) faulty and in good condition, is a remarkable novelty in the corpus of our knowledge on the Bank of Algeria!

(2) Thanks to M. J.-L. Aubert for his critical review of the article.