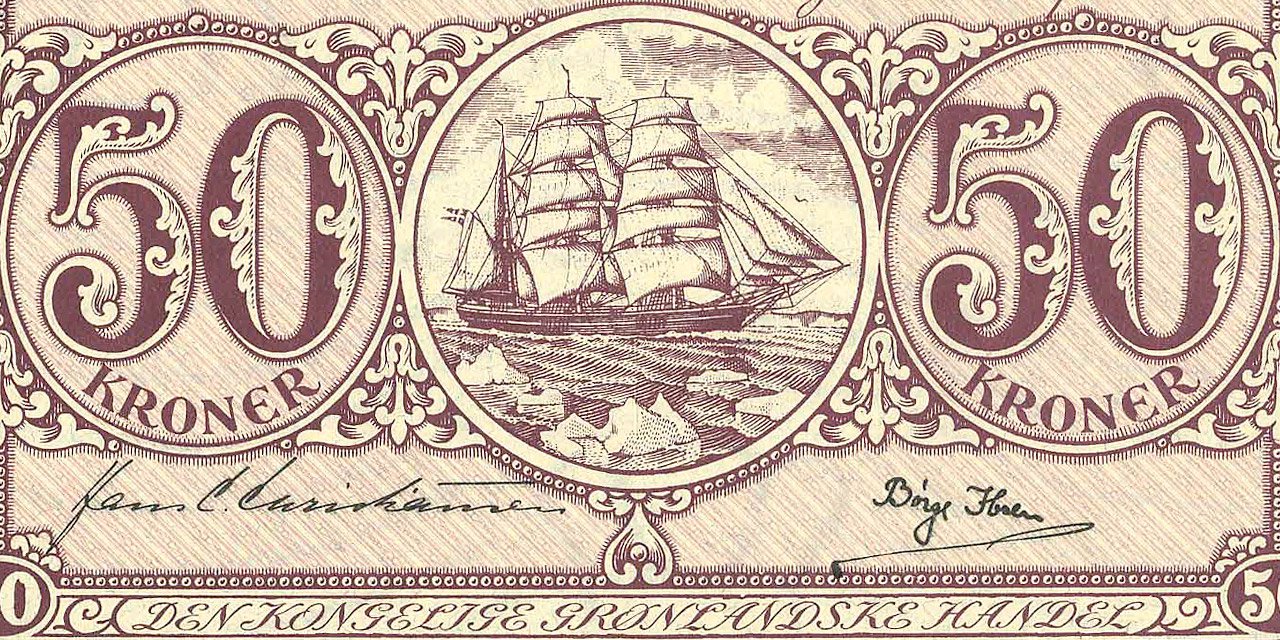 The banknote of 50 Kroner Greenland

Discover the three known types and their respective rarities!

Greenland (1)! This vast territory covered by 80% ice and glaciers is located largely beyond the Arctic Circle. The island has a population of around 57,000, of which 15,000 live in the capital city Nuuk and the rest along the ice-free and fjord-lined coasts, particularly in the southwest. The history of Greenland is a succession of waves of colonization. The first Vikings land there in the 10th century. Between the 13th and 18th centuries, the Inuit civilization dominated. Then Greenland gradually became a Danish colony until 1953 before becoming a country which gained autonomy in 1979 and which has had its own government since 1981. Geographically located in North America, the island is however politically European but outside of the EEC. The local currency is the Danish krone.

It is however difficult to imagine that this territory with extreme climatic conditions could have a monetary history. And yet, the first Greenlandic banknotes appeared at the beginning of the 19th century. Undoubtedly in the image of this land at the end of the world, the first issue is designed on simple rectangles of paper without backing, printed in monochrome, numbered and signed by hand like the 1 Rigsdaler Type 1803 (Ref. Pick: # P-A4 or TBB: # B104a). In the middle of the century, the banknotes passed in two colors but were still just as austere. It was not until 1874 to see more elaborate issues comprising a decorative frame or background with the value clearly identified, the emerging coat of arms of the country (1) and a small animal illustration as on the 50 Øre Type 1874 (Ref. Pick: # P-A37a or TBB: # B139a).

But this article is specifically devoted to the 50 kroner issued between 1926 and 1967 and of which there are three very distinct types that we will detail in the following lines ...

The first 50 Kroner Type 1926-1945 banknote (Ref. Pick: # P-17 or TBB: # B303) is issued by the Administration of Greenland (Grønlands Styrelse). This one does not have a watermark and is not dated. Its dimensions are 139 x 83 mm. The printer and the number of notes are unknown to us. The front is in a monochrome lilac color on an orange-yellow safety background printed all the way to the margins. In the center, a sailing boat sails among the icebergs with the value in figures on each side in a decorated medallion. The texts are in Danish. Signatures and numbering are printed in black. The issuing institute "Grønlands Styrelse" is repeated continuously inside the frame.

The back in monochrome orange has the value "50 KRONER" repeated in the corners. In the center in a radiant medallion, the initials "GS" of the issuing institute "Grønlands Styrelse", framed on the left by the coat of arms of Greenland and on the right by the coat of arms of Denmark. The margins are printed with continuous stripes.

The banknote contains 3 combinations of signatures divided into the following references:

This banknote is by far the rarest of the 3 types. We only know of two copies numbered "3269" and "5616". The first note illustrates this article. It was first offered for sale in October 1992 at Sotheby's in London, during the sale of the Johan Chr. Holm Collection (lot # 1314), then sold ten years later at Stack's Bowers in 2012 for $ 16,520 in UNC grade(lot #4391). It is the only known note with the 1st combination of signatures "Daugaard Jensen / Sveistrup". The second note is also the only one known with the 2nd combination of signatures "Oldendow / Sveistrup" but we have not found any information about it except a photo of the front on the web (3)!

The second 50 Kroner Type 1945 banknote (Ref. Pick: # P-17A or TBB: # B306) is issued by the Administration of Greenland (Grønlands Styrelse). This still does not have a watermark or date. The printer and the number of copies are unknown to us. The thumbnail is identical to the previous one but the margins are no longer printed on the front and back. The banknote only exists in one combination of signatures "Eske Brun / Ole Pedersen".

This note is the second rarest of the 3 types. We only know of 5 copies:

Two banknotes on sale in August!

For information to collectors, two copies are offered in the next Stack's Bowers sale on August 5, 2020:

The third 50 Kroner Type 1953-1967 banknote (Ref. Pick: # P-20 or TBB: # B155) is issued by the Royal Greenland Trading Company (Den Kongelige Grønlandske Handel). This one has lines in the shape of waves as a watermark. The note is not dated. The printer and the number of copies are unknown to us. The note is identical to the second type but inside the frame, it is the issuing institute "Den Kongelige Grønlandske Handel" which is repeated continuously. The banknote only exists in one combination of signatures "Hans Christian Christiansen / Børge Ibsen". In the center on the back, the letters "GS" are replaced by a map of Greenland.

This note is the most frequent of the 3 types but remains however rare. We only know of 9 copies:

A banknote for sale on ebay!

The 50 Kroner Type 1953-1967 banknote is very easy to find in specimen. We have listed 21 copies, of which the identical states of quality (the banknotes are almost all graded between 64 and 66) as well as the series of numbers recorded seriously suggest that there was a find in the early 2010s. See our summary table below:

(1) The name Greenland means "Green Earth".
(2) The Greenland coat of arms consists of a crowned polar bear, standing on its two hind legs, inside a blue shield. The polar bear here symbolizes the fauna and the dominant color of the vast territory, while blue represents the Atlantic and Arctic Oceans.
(3) Banknote Museum.