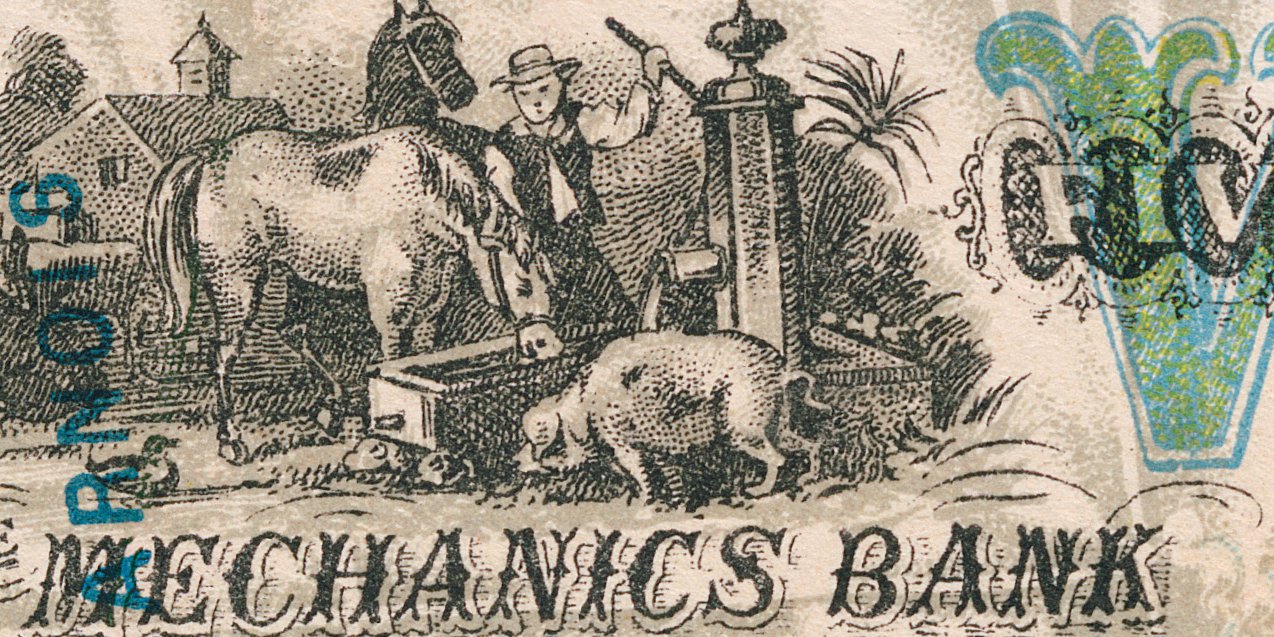 In addition to the recent cataloging of Canadian banknotes, here is the presentation of two chromolithographs illustrated with vignettes of this country.

Advertising chromolithographs are the ancestor of the images that we used to find in chocolate bars. However, in addition to chocolate, they could also accompany chicory, cookies ... or be given to customers of certain businesses. There are multitudes (certainly several thousand), with extremely varied themes, but I only know 73 types relating directly to the bank note, 72 types belonging to 5 series specifically dedicated to paper money, and one type belonging to a series of the Liebig brand dedicated more broadly to "money at different times". The reproduction of the thumbnails, apart from two exceptions, is perfectly consistent with the original, and is accompanied by at least one character and various contemporary elements, even a skeleton making it possible to imagine the context in which it was used the note.

It seems obvious that the idea of ​​this advertising medium is French, the vast majority of chromolithographs relating to hexagonal products or businesses, even if, much more rarely, they have also been used in a few neighboring countries (Belgium, Italy, Germany ) and in Algeria.

The other argument is the over-representation of French paper money in the illustrations, with 19 types out of 73, including a series entirely devoted to assignats.

Finally, annotations on chromolithographs from my collection allow us to affirm that they were distributed at least from 1880 to 1924. The interest is major for the collector of banknotes since the vignettes represented cover, as indicated previously, the period of assignats, but also represent banknotes of the world issued between 1863 to 1906 and some of which are currently extremely rare.

Concerning Canada, the first chromolithography (# S4/6 of the catalog that I am devoting to them) is part of a series entitled "Paper money in the various countries", which is certainly one of the latest (ca . 1906-1924) but also one of the rarest because used by very few brands. This is a copy edited by Maison C. BERIOT in Lille, illustrated with a $ 1 from the Dominion of Canada, dated 3/31/1898 (Ref. Pick: # 24Aa: F series, sign. at right: Courtney), and placed above a scene taking place in a "Hudson's Co. store", "where trappers exchange their furs for all the objects that are useful to them". Dimensions: 71L x 105H mm.

The second chromolithography (# S2/18 in the catalog), much more widely distributed and therefore much easier to obtain, is the most interesting "numismatically speaking". It belongs to a series that I call the series "Banknotes & stamped envelopes of the world - civilians" because, always, the banknote covers envelopes posted in the same country and is accosted by a typical character from civil society (by opposition to a series where they are soldiers). The character here is a "coureur des bois", to the right of a $ 5 from the Montreal Mechanics Bank dated 1/5/1872, signed by cashier J.H. Menzies and president C.J. Brydges, and overprinted "BEAUHARNOIS" (PS . # 1864d). The number is not visible but the reproduction is so faithful that we even read the words "Canada Bank Note Printing Tint" from the printer! Dimensions: 80L x 59H mm.

The bank went bankrupt in 1879 but was issued in 1872 banknotes of 4, 5 and $ 10. Despite moderate rating, the $ 5 which is here in question seems very unusual to me because I have found traces of a few examples:

In the state, so it is the only available chromolithography illustration of a $ 5 of the Mechanics Bank overprinted "BEAUHARNOIS"!

I thank in advance the Canadian collectors for their clarifications and corrections and I hope that together we will take to dream that the original ticket can still sleep in boxes of archives ...

Concerning the 5 Dollars Type 1872 banknote, the Charlton catalog specifies on page 235 the following information: “Tip for collectors. A register of issued notes of this bank was published in the Canadian Paper Money Society Registry (2016). The following totals have been recorded for all varieties combined which include notes in institutional collection in brackets:

Notes of this bank are uncommon in all grades; they are very scarce in Fine or better condition. $4 and especially $5 notes overprinted BEAUHARNOIS are available from time to time, but those overprinted ALEXANDRIA are very seldom offered".

Below, by comparison, the 1 Dollar Type 1898 banknote illustrating the Numizon catalog sheet and the drawing of the banknote for chromolithography # S4/6!