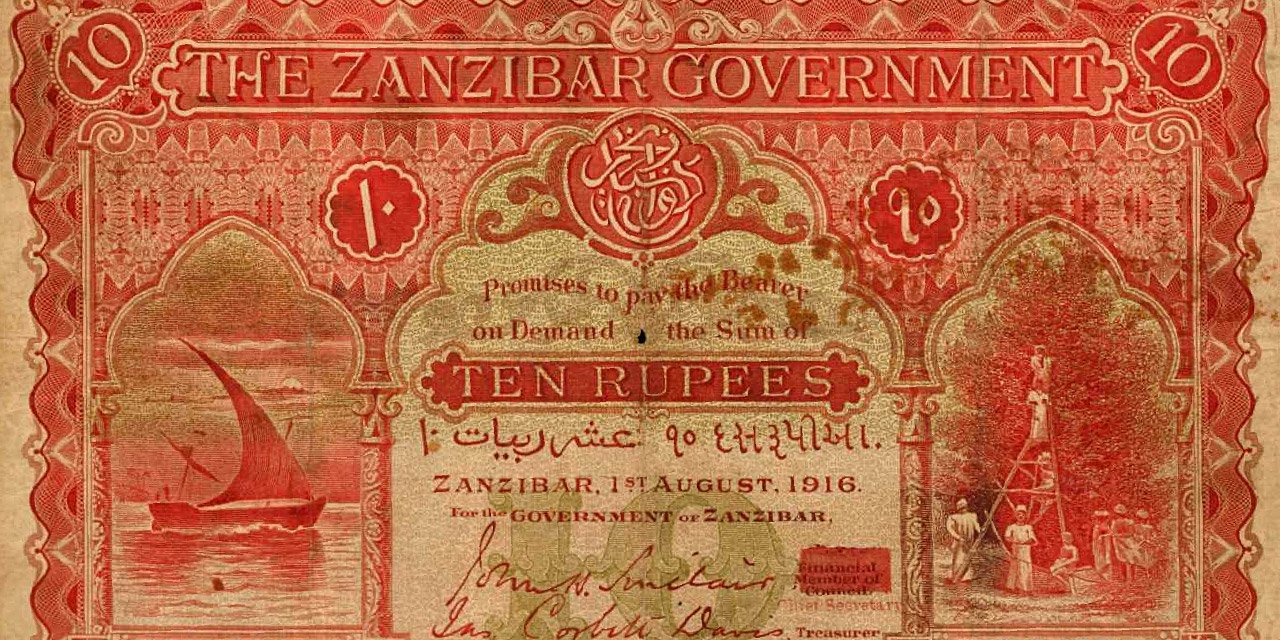 Discover how these banknotes became rare ... and expensive!

What a funny name !

Zanzibar (1) is a small archipelago in the Indian Ocean located off the coast of Tanzania. This semi-autonomous territory is made up of three main islands (Unguja, Pemba and Mafia) and several other small islands. During the great explorations, Zanzibar first fell under the control of the Portuguese Empire, then in the 17th century, these islands came under the control of the Sultanate of Oman. Also known as the Spice Islands, Zanzibar is gradually becoming a major trading center in the region for the ivory and spice trade. In the mid-19th century, Zanzibar served as a transit point between Asia, the Middle East and Africa for a large slave market. At the end of the 19th century, the territory came under the control of the British Empire. On December 10, 1963, Zanzibar gained independence by becoming a constitutional monarchy governed by Sultan Jamshid bin Abdullah. But the young ruler was overthrown a month later in a bloody revolution in which thousands of Arabs and Indians perished at the hands of local African revolutionaries. The Sultanate is then replaced by the People's Republic of Zanzibar and Pemba. In April 1964, the republic merged with Tanganyika to create the present Republic of Tanzania.

It was on January 1, 1908 that the first issue of banknotes denominated in rupees was put into circulation in Zanzibar. This issue comprises a series of 5 single-sided notes of 5, 10, 20, 50 and 100 rupees. Apart from their value, the denominations are identical to the front on which is depicted a dhow in moonlight on the left and fruit pickers and a ladder on the right.

This third issue was introduced on September 1, 1920. The year 1920 should be considered as a separate year since the local authorities decided to add two new values comprising a 1 rupee Type 1920 and a 500 rupees Type 1920 printed with new colors but with an illustrated vignette almost identical to the values already known. The 500 rupees Type 1920 is Zanzibar's rarest banknote.

This fourth and last issue was introduced on February 1, 1928 with a circulation limited only to the values of 5, 10 and 20 rupees. These 1928 banknotes are also the ones you can hope to collect more easily.

Only 20 banknotes are graded in the PMG Population Report, all denominations and years combined, and are distributed as follows:

Why these banknotes are rare?

The value of Zanzibar banknotes is linked to many factors: an issue duration limited to just 20 years and denominations printed in very small quantities. There will not remain today more than 500 copies known all denominations and years combined. Then, the table of graded copies in the PMG Population Report is quite eloquent. Add to this, the great disparity of collectors looking for their banknotes: collectors of African banknotes, collectors of banknotes denominated in rupees, collectors of banknotes from former British colonies, collectors who want a banknote from each country and finally the a few collectors who focus only on Zanzibar banknotes ...In 2011, at a sale organized by the Spink house in London, a set of 4 specimens of Zanzibar banknotes reached the price of £ 175,890 (approximately € 203,420). The collection consisted of values ​​of 5, 10, 20 and 100 rupees (2). So, while waiting to find the rare pearl that will illuminate your collection of world banknotes, you can wait by purchasing the specimen-essays of the 100 roupies Type 2017 or 500 roupies Type 2017 ... with the effigy of Freddy Mercury!

(1) The name of Zanzibar was given in the Middle Ages by Persian navigators who designated the coastal region of East Africa including the Zanzibar archipelago under the name of Zangibar or Zanğibar, meaning "the land of blacks" (from zang or zanğ, “blacks”, and bar, “land” or “country”) in Old Persian. It was the Portuguese who, during their wanderings around Africa in the 15th and 16th centuries, made the archipelago known under its current name. (Source: wikipedia).
(2) “The Zanzibar Government Banknotes: The Rarest of them all” by Navona numismatic, 2014.